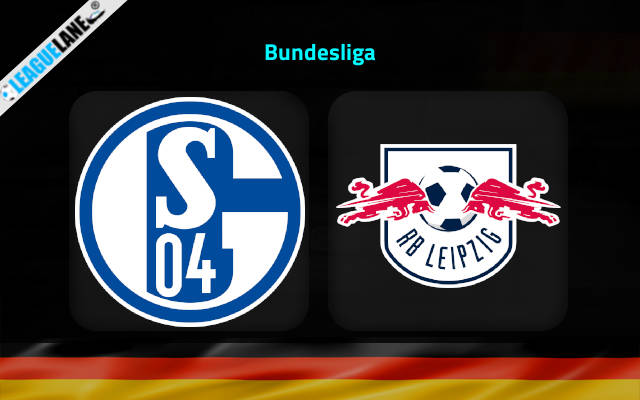 Schalke 04 vs RB Leipzig Predictions and Free Tips from our expert tipsters when the teams go head-to-head in German Bundesliga on Tuesday, 24 January 2023.

Schalke are by far the worst team in the entire German top flight, and are major contenders to get relegated at the end of the campaign. They have just two wins to their name all through the league season, and scored the least number of goals.

Meanwhile, Leipzig are one of the best in the Bundesliga at the moment, and are going after a top-three finish. Currently they need a surplus of just one point to climb level with the second-placed Eintracht Frankfurt.

The latest encounter between the two ended in a 0-3 win for Leipzig, and they are also on a three-fixture winning streak – with a combined scorecard of 12-0 in their favor.

In fact, the Red Bulls have a perfect winning record at this ground in h2h clashes after 2017, and the last the hosts ever scored a goal at this stadium was also in 2017.

Who will win the match between Schalke 04 and RB Leipzig?

The Red Bulls won four of the past five league games, and of their total three losses in the Bundesliga, two came against teams currently placed in the top-three.

On the other hand, Schalke are placed bottom-most in the table, and have a perfect losing record barring just two wins and three draws. They have the worst offensive record in the league – with just 13 goals to their name from 16 fixtures, and only one other team conceded more goals than them.

And most importantly, Schalke have a terrible h2h record against this rival over the years.

Surely expect a win for RB Leipzig this Tuesday at the Veltins Arena.

The Red Bulls scored 12 goals from the last three h2h clashes, and they scored two or more goals in 12 of their past 14 overall games this season. And with Schalke having the worst defense in the league after Bochum, the game is expected to have goals in huge numbers.

Chances are quite low for that to happen. Schalke failed to find the back of the net in the past three h2h encounters, and in five of the former six h2h clashes as well. In fact, it has been six years since they last scored a goal at this stadium against this opponent.

On top of that they scored the least number of goals in the Bundesliga this season as well.

Leipzig are placed fifth in the table at the moment, and are just one point below the second-placed Eintracht Frankfurt. And Frankfurt are pitted against the fourth-placed Freiburg this game week.

At least one of the two will drop points, and this is an opportunity for the Red Bulls to climb into the podium spots. They are in great form – winning five of their last six league fixtures. And they even held defending champions Bayern Munich to a draw the last game week.

On the other hand, Schalke are placed 18th in a table of 18, and they are the only team yet to post double-digit points on the board. They are the best contender to get relegated as of now.

The last they ever recorded a league win was back in November, and before that in September. These are the only two wins in their current league season. It is also to be noted that they were promoted to the top flight only at the end of the last season.

Most importantly they have a worrying h2h record against this opponent over the years, and conceded goals in huge numbers all along.

Likely, RB Leipzig to Win at an odd of 1.67 would be the best tip to make this Tuesday.

And considering the sheer difference in quality between the teams, the skewed h2h record in favor of the Red Bulls and the worrying defense of Schalke – expect goals in huge numbers. And as such, the Over 2.5 Match Goals at an odd of 1.75 would be another great pick.