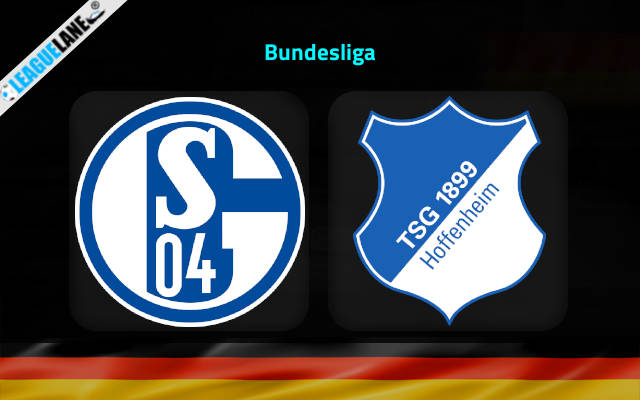 Schalke are a total mess so far in the German top flight this season. They are hanging by a thread over the relegation cut-off, and are on a losing streak too. Meanwhile, Hoffenheim are slightly struggling at the moment, but they are still considered to be one of the top-tier prospects of the league.

Schalke are currently placed 16th in a table of 18 – in the relegation zone. So far they were able to register a single win, and this only victory came against none other than the bottom-most placed Bochum.

Going on, they are on a losing streak at the moment, and only one other team let in more goals than them in the entire competition. Do also note that they let in the most number of goals at home in the entire Bundesliga.

Meanwhile, Hoffenheim did lose three games so far in the tournament, but all three losses came against teams in the top-six of the table as of now.

Going on, they need a surplus of two points to climb level with the fourth-placed Dortmund, and Der BVB next takes on toppers Union Berlin. Moreover, the second-placed Freiburg are next pitted against the third-placed Bayern Munich.

Likely, chances are high for a major rearrangement of positions in the top-most tier, and this is an opportunity that Hoffenheim just cannot let to go to waste.

Count on them to dominate proceedings this Friday at the Veltins Arena, and secure a much-needed win.

Schalke lost 4-0 on the road the last match-day, against Bayer Leverkusen. They are also on a long losing streak, and all through the current league campaign they managed to register a single win.

Moreover, they failed to perform well at least in front of their home crowd, and most importantly they are a team that were promoted to the top flight just at the end of the last season – and as such they severely lack in experience.

On the other hand, Hoffenheim did lose certain matches in the Bundesliga this season, and every single one of those came against titans in the German top flight. Other than those fixtures, the team really went on a superb run.

They scored in plenty during his stretch, and importantly they also have a dominant h2h record against this rival over the years.

For these reasons, expect Hoffenheim to secure a victory this Friday at the Veltins Arena.

Tips for Schalke vs Hoffenheim