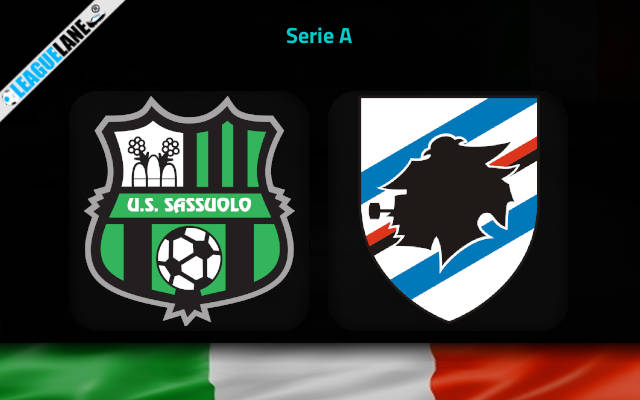 Sampdoria travel to Reggio nell’Emilia to battle Sassuolo in the second round of the 2021/22 Serie A campaign.

Sampdoria will be looking to get on the board in the second round of the new Serie A season, following a narrow 0-1 defeat at home to Milan on the opening day.

Manolo Gabbiadini missed a couple of fantastic chances to get Le Samp back on level terms on the occasion, but Milan’s new keeper Mike Maignan came up with fabulous denies to keep a clean sheet on his debut for the new team.

The new manager Roberto D’Aversa (took over Claudio Ranieri on the bench) will thus hope to see his team at least scoring their first goal of the season here at MAPEI Stadium.

In theory, this match should really have goals in it because both sides possess an extraordinary firepower on display in the final third.

Sassuolo proved it last weekend by putting three goals past Hellas Verona in an away win on the opening day.

I Neroverdi have also entered the new season with a new manager as Roberto De Zerbi gave his place to Alessio Dionisi.

Dionisi has done a fantastic job with Empoli in the previous term of Serie B, but decided to accept this Sassuolo challenge instead of leading his old team in the elite class.

Goals will well be on the cards when these two sides come across each other. The Over 2.5 goals FT & Both Teams To Score is our top betting suggestion at the 1.83 odds.

As for the outcome, we’ll back the hosts at the 2.00 odds since they were much more successful in this matchup in the last couple of years.