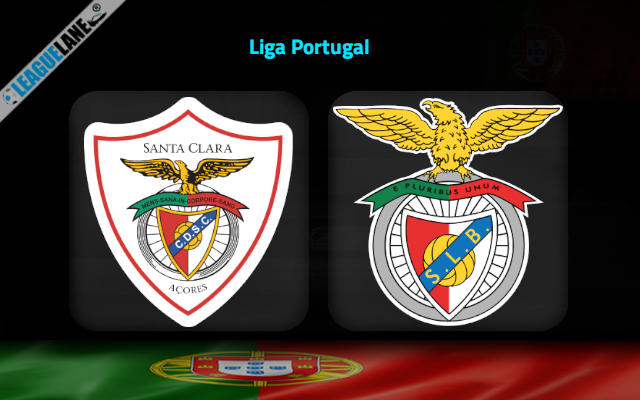 Santa Clara vs Benfica Predictions and Free Tips from our expert tipsters when the teams go head-to-head in the Liga Portugal on Saturday, 21 January 2023.

Santa Clara have lost half of the games they have played so far in this campaign. As a result, they are dropped into 16th position, inside the relegation spot in the table.

They will have a very hard test on Saturday as they faces an in-form Benfica, who is in possession of the top spot at the moment.

Benfica can also rely on the recent tradition since they won the previous three encounters against Santa Clara. The latest meeting ended in a 2-1 win for Benfica.

At this venue, Benfica have a 100% unbeaten record against Santa Clara. They have netted in a total of 10 goals from the past four h2h encounters here.

Who will win the match between Santa Clara vs Benfica?

Benfica is priced at just 1.33 odds to claim the win here. Their exceptional form in the campaign is the main reason for bookies considering them as big favorites.

In addition, Santa Clara won just once in the past five home matches. Thus, expect a victory for Benfica on Saturday.

Three of the past five away matches of Benfica had goals under 2.5 ft. In fact, their goal per game rate is below 2. we expect Benfica to have the control of this match and in that case, our pick is for an under 2.5 goals ft bet.

Santa Clara doesn’t own a strong attacking side this season. They were able to score a total of just 11 goals from 16 games and we cannot back the both teams to score bet when one is having such a weak offense.

Benfica is four points clear at the top of the table. They should be able to add more points as they faces Santa Clara, positioned at third from the bottom of the table on Saturday.

A 0-2 ft score-line at 7.00 odds will be our first betting pick here. For the second tip, both teams to score: no at 1.80 seems ideal considering the weak attacking side of Santa Clara.