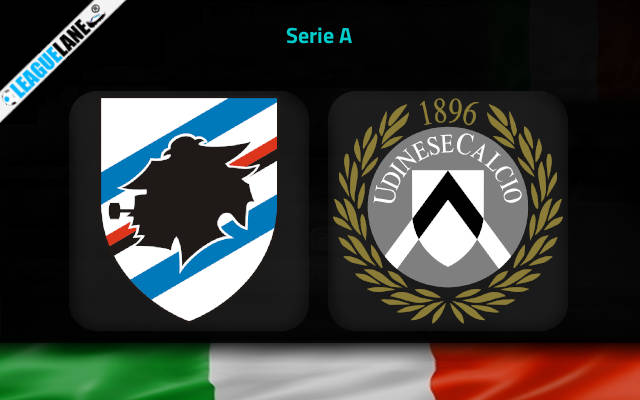 Sampdoria vs Udinese Predictions and Free Tips from our expert tipsters when the teams go head-to-head in Italian Serie A on Sunday, 22 January 2023.

Apart from Cremonese, Sampdoria are the worst team in the Italian top flight this season – and are expected to get relegated at the end of the campaign. They scored the least number of goals of all the teams in the league, and only Cremonese conceded more – that too just one goal.

Meanwhile, Udinese are in possession of the eighth spot in the table, and are going after a top-six finish at the least. Their form lately has been a little worrying, but they could use this upcoming encounter to secure a much-needed, confidence-boosting win.

Udinese recorded a 2-1 win in the latest encounter, and they are also unbeaten in the last two years. They scored five goals from the past two fixtures, and it has been four years since the hosts managed to keep a clean sheet at this ground.

Who will win the match between Sampdoria and Udinese?

Meanwhile, Udinese might be on an unimpressive run at the moment – but do note that they started their campaign with a long winning streak. They are determined to get back into their groove, and it helps their cause that they have a good h2h record in the last two years.

Likely, expect a hard-fought win for them this Sunday.

Sampdoria have the worst defense in the league apart from the dead-last placed Cremonese, and they conceded goals in plenty throughout their h2h history with this rival.

In the meantime, Udinese have also been struggling to keep clean sheets lately, and particularly so on the road.

It appears that chances are quite high for the fixture to turn into a high-scoring affair.

Five of the last six h2h meetings had goals from both teams, as well as three or more goals. Moreover, both teams are currently struggling with their backlines, and are under intense pressure as well.

Likely, anticipate goals to come from either end of the pitch.

Sampdoria are placed 19th in a table of 20, and are on a long stretch of poor performances. In fact, they have a 100% losing record at home barring two draws, and they also have a poor h2h record in the past two years.

Udinese need a win at any cost now, and will go all out for the same. They had a tough schedule in the past few game weeks, and this is the first instance where they are the outright favorites. Count on them to make the most of it. And the odds for their win are placed at 2.20

Likely, the second choice could be the Over 2.5 Match Goals wager at an odd of 2.25.