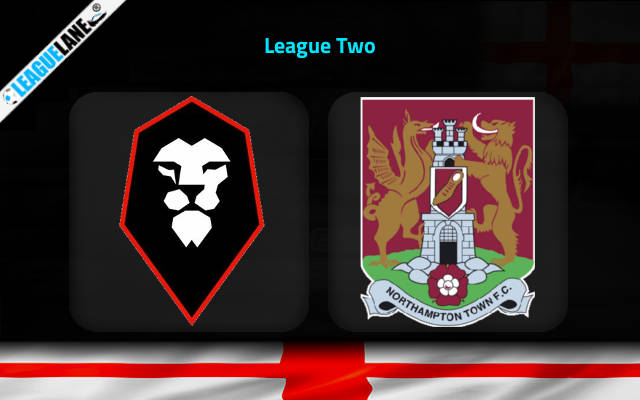 Salford City vs Northampton Predictions and Free Tips from our expert tipsters when the teams go head-to-head in League Two on Saturday, 7 January 2023.

Northampton showed their strength as they defeated league leaders Leyton last time by 1-0. This win helped them reach the third position on the table. Following this win, manager Jon Brady will expect the same from his team as they will face Salford.

At the same time, Salford played a good game against Bradford last time. However, they lost that game by 3-2. Earlier they were on a three-game unbeaten run. It is important to understand that they have not won at home since August.

Salford won this fixture back in October by 1-0. This is their only victory in the last five head-to-head matches.

Another interesting fact is that Northampton are unbeaten at Peninsula Stadium against this team.

Who will win the match between Salford City and Northampton?

Northampton will most likely win this fixture. The two main reasons are that they have a strong unbeaten record against Salford at Peninsula Stadium since 2020. Also, they managed to defeat league leaders Leyton Orient most recently.

On top of that their opponents have a fragile form at home this season.

At this ground, this fixture is a high-scoring one. The last two encounters ended with a minimum of three goals being scored.

The chances are high that both teams will score in this fixture. Salford scored two goals in their last league outing. Also, on this ground, both teams have scored plenty of goals.

The visitors are third in the league and have performed well against Salford in the past. Do note that the host are yet to win at Peninsula Stadium against Northampton. Therefore, the first tip is that Northampton will win this game– the odd for this tip will be at 2.60 odd.

Our second tip is that Sam Hoskins will score anytime – at 3.20. He is the top scorer this season for Northampton. Also, he scored two goals in his last three appearances. He scored the opening goal against Salford City in Northampton’s first victory at Peninsula Stadium.