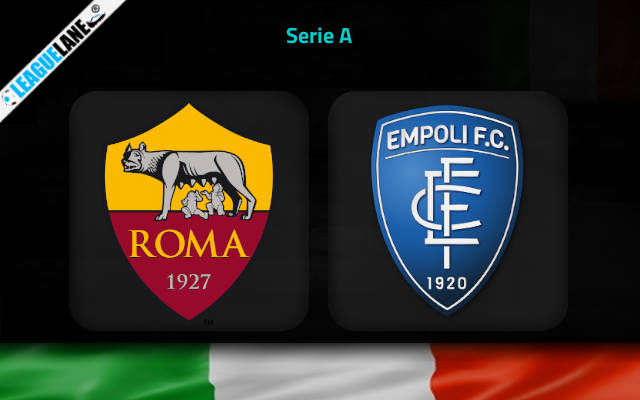 Roma will be looking to bounce back from a Derby della Capitale defeat as they host recently-promoted Empoli on Sunday afternoon at Stadio Olimpico.

Roma suffered their second defeat of the Serie A campaign last weekend when they fell 3-2 to bitter enemies Lazio in the famous Derby della Capitale.

Jose Mourinho’s men did not deserve to lose as they were a better outfit on the occasion.

Roma continued their fine attacking distribution on Thursday evening in the UEFA Europa League, though.

They had 10 shots on target in a commanding 0-3 victory at Ukrainian Premier League side Zorya.

The Romans also generally got off to a decent start to the Serie A campaign with four wins in the opening six rounds.

They will have a nice opportunity to extend their superb attacking displays here against Empoli who fancied attacking-minded football so far in the season.

Empoli will travel to the capital on the back of consecutive wins over Cagliari and Bologna. They’ve bagged six goals in the process.

However, Aurelio Andreazzolli’s men can be vulnerable defensively. They’ve shipped 10 goals in six games so far in the season and their back line will be heavily exposed here against free-scoring Roma.

The home win in a high-scoring affair is the way to go here. We will particularly be looking towards Tammy Abraham who should have plenty of space to deliver up front past the attacking-minded Empoli.

The former Chelsea striker came on from the bench to play the final 30 minutes of the mid-week’s game at Zorya and managed to find the net during that time. He is 1.80 to score anytime here.