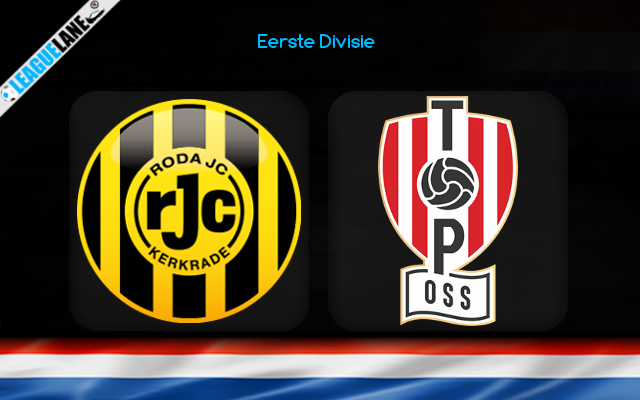 Roda vs TOP Oss Predictions and Free Tips from our expert tipsters when the teams go head-to-head in the Netherlands Eerste Divisie on Friday, 13 January 2023.

Roda have been struggling to seal a victory of late. They have lost four of the last five league matches and dropped into 9th position, just outside the safe zone in the league standings.

TOP Oss, who sits at the 19th position in league standings, will be their Friday’s Eerste Divisie rivals. By the looks of things, Roda will have a good chance to return back to the winning ways.

Roda have only lost twice against TOP Oss in the history of this head to head match-up. However, the reverse fixture had finished in a 3-0 win for TOP Oss.

At this venue, Roda have a 100% winning record against TOP Oss barring a single fixture which had finished in a 1-1 draw.

Who will win the match between Roda vs TOP Oss?

Roda won three of the last five home fixtures scoring goals in a worrying fashion. On the other side, TOP Oss are on a four-game winless run.

Moreover, Roda have a strong h2h form against TOP Oss. Therefore, we expect a victory for Roda on Friday.

Roda netted in a total of 12 goals in the last five home outings while leaking 8 goals. Since we expect a result in favor of Roda, the above stats are enough to back over 2.5 goals ft. In addition, TOP Oss have played 60% of the matches with over 2.5 goals option.

Backing Roda to win as the main betting option at 1.55 odds seems ideal enough as they have a much better form when compared with TOP Oss.

For the second tip, we like to place the both teams to score bet at 1.83 odds considering the weak defenses of both.