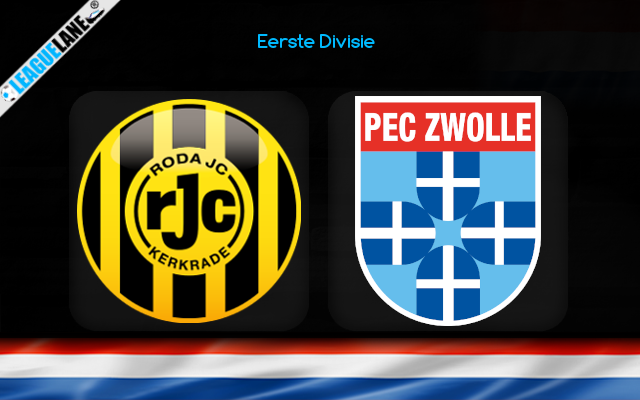 Roda vs PEC Zwolle Predictions and Free Tips from our expert tipsters when the teams go head-to-head in Eerste Divisie on Monday, 30 January 2023.

Roda defeated Jong Ajax last time by 2-1. The key point from this result is that this is their first league victory since November. Now they have a huge challenge ahead of them as they will face league leaders PEC Zwolle on matchday 21.

On the other hand, Zwolle showed their strength as they defeated Venlo by 2-0 in their last league outing. The only drawback for them is that they are out of the KNVB Cup as they lost to Feyenoord.

Both teams will be playing against each other after a period of nearly five years. Zwolle have a good record against this opposition as they are unbeaten in eight of the last ten head-to-head matches.

Who will win the match between Roda and PEC Zwolle?

Zwolle will win this fixture with ease. They are arguably the best team in the league this season. Not to mention that they have a solid away form as well. At the same time, Roda have not won a home match since October. They have struggled all season against top teams.

Zwolle have scored a minimum of two goals in their last three wins this month. At the same time, Roda have scored in all of their home matches in the last two months, with just one exception. Therefore, it will be a wise decision to back on both teams to score.

The league leaders are on a seven-game winning streak. At the same time, Roda are tenth in the league and have lost nearly 40% of their matches till now. You can back the following, as our first tip is that PEC Zwolle will win this game – at 2.05 odd.

Our next tip for this game is that Both teams to score– the odd for this tip will be at 1.65. This is after considering that both teams have scored in their last two meetings at this ground. Also they have both scored plenty of goals in their January fixtures.