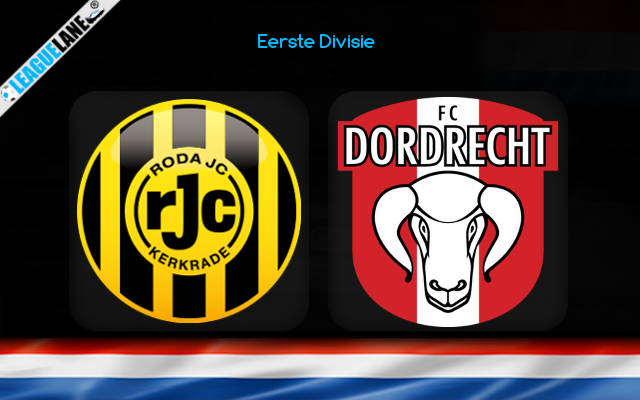 Roda vs Dordrecht Predictions and Free Tips from our expert tipsters when the teams go head-to-head in Eerste Divisie on Friday, 27 January 2023.

Roda survived a tough test and emerged victorious as they defeated Jong Ajax by 2-1 recently. This win finally ended their three-game winless drought and they will expect a similar result as they will clash with Dordrecht.

At the same time, Dordrecht had to settle for a draw when they faced Telstar last time. The team is facing a goal drought this month as they have scored only one goal which was against Jong Utrecht.

Jurgen Streppel’s men are on a six-game winning streak against this team. Both teams last clashed back in August and the game ended in a 2-0 victory for Roda.

It has been more than three decades since the last time Dordrecht won this fixture at this stadium.

Who will win the match between Roda and Dordrecht?

The previous history shows that the host have an excellent winning record against this opposition. Another important point to note is that they are unbeaten in their last two outings in the league. Considering all of this, the chances are high that Roda will take home all three points from this game.

At this ground, this fixture is a high-scoring one. Roda have scored at least four goals in their last five wins against this team, with just one exception.

The chances are low that both teams will score in this fixture. Only Roda have scored consistently in the last three years. Moreover, it has been more than four years since the last time the visitors scored a goal at this ground.

The host have scored more than three goals in four of their last five wins against this team. They won the March fixture of last year by a huge 4-0 margin. Therefore, the first tip is that Roda will score over 2.5 goals– the odd for this tip will be at 2.62 odd.