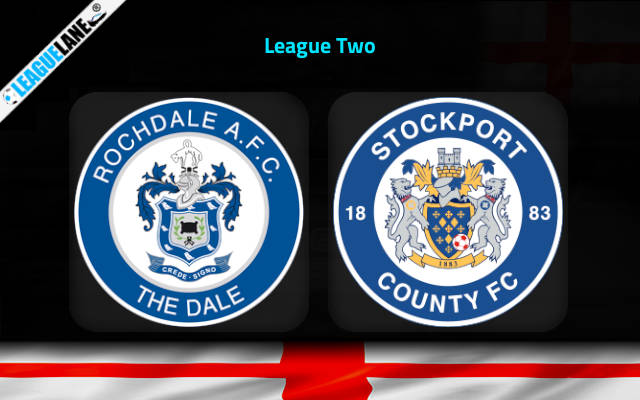 Rochdale vs Stockport Predictions and Free Tips from our expert tipsters when the teams go head-to-head in League Two on Saturday, 10 December 2022.

Rochdale have lost 65% of their matches this season. They are currently on a three-game losing streak. If they don’t start winning games this month they will find it very difficult to stay above the relegation zone at the end of this current season.

Stockport began this month on a good note as they defeated Hartlepool by 5-0. This win silenced the critics as they had earlier lost to Leyton Orient.

Stockport are on a four-game winning streak at Spotland Stadium. The host have won only once in their last five overall meetings.

The last time the host won this fixture at their home ground was over seventeen years ago. The team led by Jim Bentley have lost three of their last five home games in the league.

Who will win the match between Rochdale and Stockport?

The visitors will most likely take all three points from this game. They have a strong winning record against the host at their home. It is important to mention that the last time the visitors lost an away game was nearly three months back.

Stockport have consistently scored over 1.5 goals in their last three matches at home against this side.

This fixture rarely lacks goals. Despite being at the bottom half of the table, the host have managed to score in two of their last three outings. We can expect the same pattern to follow-up this time as well.

The visitors have an excellent winning record against Rochdale. Also, they have lost more than half of their matches this season. We can back Stockport to win this game– at 1.85 odd. They have won every fixture against this team starting from 2006.

Our second tip is that Over 2.5 goals with Both teams to score – at 2.50. Both teams have scored consistently in their last three meetings. Also, they have scored a combined total of ten goals in those three matches.