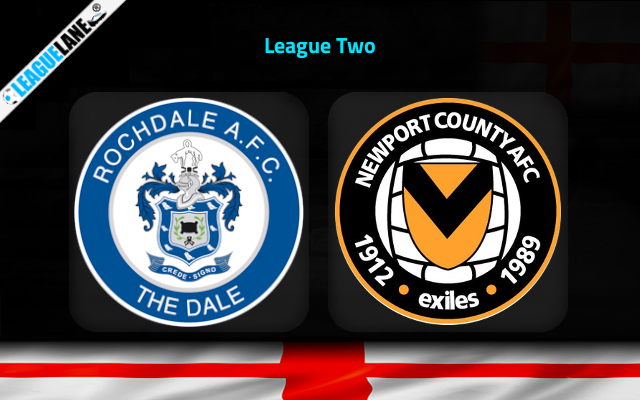 Rochdale vs Newport Predictions and Free Tips from our expert tipsters when the teams go head-to-head in the England League Two on Saturday, 07 January 2023.

It has been a while since Rochdale tasted a victory. They are on a six-fixture winless streak. Five out of those six games had ended in a defeat for them. Such a displeasing form form has affected in their position.

Newport sits four spots and 9 points clear from their Saturday’s counterparts and the danger zone residing Rochdale. Despite of the current slump, Newport might head into this fixture with enough of spirits.

Rochdale won four of the last five h2h encounters against Newport. The reverse fixture ended in a 0-1 win for Rochdale.

They have only met twice at this stadium. Rochdale won both the fixtures scoring a total of six goals.

Who will win the match between Rochdale vs Newport?

We don’t expect a positive display from Rochdale despite of their strong h2h form against Newport. The major reason for that is their current form at home.

Rochdale lost four of the last five home outings while Newport follows a four-game unbeaten streak on the road. Thus, expect a victory for Newport on Saturday.

The past four away matches of Newport had fewer than 2.5 goals ft. Rochdale have managed to be a part of some over 2.5 goal affairs at home but all those had ended in a defeat for them. Therefore, expect an under 2.5 goals ft scenario here.

Newport doesn’t own a solid defense. But the attacking side of Rochdale lacks the potential to score one past this Newport side.

Rochdale have only scored four goals in the last five home matches. In that case, we don’t expect a both teams scoring scenario here.

Newport will have a great chance to maintain their unbeaten form on the road on Saturday. Backing them at 2.20 odds will be our first betting pick here.

For the second tip, we like to place the under 2.5 goals bet considering the goal trend of both these sides.