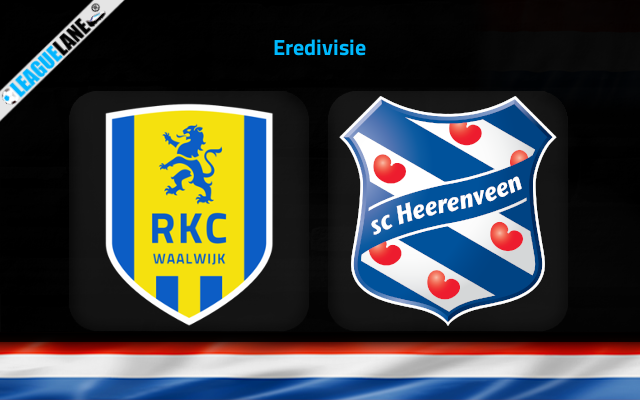 RKC Waalwijk vs Heerenveen Predictions and Free Tips from our expert tipsters when the teams go head-to-head in the Dutch Eredivisie on Saturday, 7 January 2022.

Conceding defeats consistently of late affected Waalwijk. They have dropped into 10th position and are currently seven points away from safe zone in the league standings.

On Saturday, they will be facing Heerenveen as their visiting rivals. They sits two spots above Waalwijk in the standings. Moreover, they have bagged a total of 10 points from the last five league outings.

Heerenveen have not conceded a defeat against Waalwijk in the last 10 years. The latest meeting had finished in a goalless draw.

At this venue, the hosts are having a winless form for the past two decades. In fact, they have only won thrice in the history of this clash at this stadium against Waalwijk.

Who will win the match between RKC Waalwijk vs Heerenveen?

Waalwijk have generally offered inconsistent performances at home so far in this season. They were winless in two of the past three home outings.

Meanwhile, Heerenveen head into this fixture following an unbeaten streak of four games on the road. They have won the last two road trips in a row too.

On top of that Heerenveen rather have a superior head to head form against Waalwijk. Therefore, expect a win for Heerenveen on Saturday.

Around 70% of the matches played by Waalwijk saw the landing of over 2.5 goals ft. Their previous four league fixtures had the trend.

Heerenveen have been also recording affairs with goals over 2.5 lately. In that case, expect this match to have over 2.5 goals ft.

Heerenveen defense have delivered impressive performances all through this season. But the attacking side of Waalwijk are having a good form especially at home.

Waalwijk have scored even in the games they lost at home. Therefore, both teams to score option is likely to land in this match.

We expect Heerenveen to post two while leaking one from the Waalwijk offense. A 1-2 correct score will be our first tip for this clash. Over 2.5 goals seems to be a decent alternative and we like to place it as the second betting option.