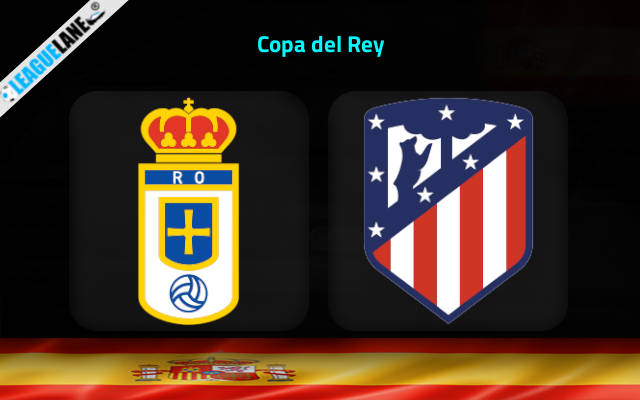 Real Oviedo vs Atletico Madrid Predictions and Free Tips from our expert tipsters when the teams go head-to-head in the Spanish Copa Del Rey on Wednesday, 04 January 2022.

Real Oviedo’s recent recordings look decent enough and could easily stand above the chances of any third division outfits who have advanced it to the quarter finals of Copa Del Rey.

They have won the last round by sealing a victory over Granada. Unfortunately, they are pitted against one of the strongest Laliga outfits Atletico Madrid on Wednesday.

Atletico Madrid have been the dominant force in the recent history of this head to head match-up. They are having a 100% unbeaten record against Real Oviedo for the past two decades.

Their most recent meeting had finished in a 0-2 win for Atletico Madrid. Three of the last four meetings at this venue had goals over 2.5ft.

Who will win the match between Real Oviedo vs Atletico Madrid ?

Real Oviedo have been recording impressive displays at home lately. They won four of the last five home outings. It is worth noting that three of those victories were from Laliga 2 fixtures.

On the other side, Atletico Madrid follows a three-game winning streak on the road and have a superior head to head form against Real Oviedo. Therefore, expect a win for Atletico on Wednesday.

Over 2.5 goals ft option is most likely to land in this match-up. Main reason for that is the goal numbers of Atletico Madrid in the past two rounds.

Since Real Oviedo looks capable of scoring at least one at home, expect this match to have over 2.5 goals ft.

We expect this match to be a both teams involving affair. Real Oviedo’s win over Granada and Torrelavega in the previous rounds is the reason why we expect a goal from their front men.