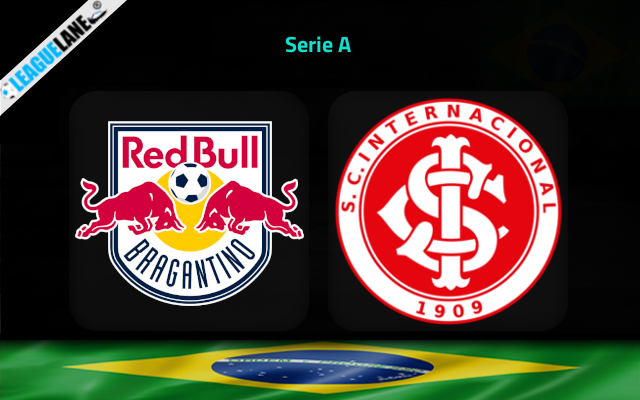 RB Bragantino have been recording inconsistent displays since the beginning of this season. They have won two, drew four and lost two of their 8 fixtures so far this campaign. With an average offensive and defensive line-up, they will be hoping to better themselves.

Red Bull recorded a 1-1 draw against Goias on road in their most recent league fixture. It was their fourth subsequent winless recording in the league. They will be hoping for a better outcome in the coming fixture at home.

Meanwhile, Internacional also possess the same form of RB Bragantino this season. Their most often outcome is a draw and have recorded it in more than the number of their wins and defeats combined this campaign. They possess an average offensive and defensive line-up too.

Internacional recorded a 1-1 draw at home against Atletico GO in their most recent league fixture. It was their fifth consecutive drawn outcome and seventh subsequent unbeaten recording in the league. They will be hoping to record another unbeaten outcome, different from their past five league recordings.

Red Bulls will be hoping top regain the positive momentum they had at the beginning of this season at home. They started off this season with a 4-0 win at home. Their chances are so high as they faces Internacional who follows a kind of slump.

By the looks of the on road stats of Internacional, we can see them recording a win, a couple of draws and a defeat out of their four away fixtures so far this season. Their major recordings are winless and hence, we can conclude in favour of both these outfits.

Analyzing the above stats, we are taking the risk of backing RB bragantino who might be having the desperation of recording a positive outcome.