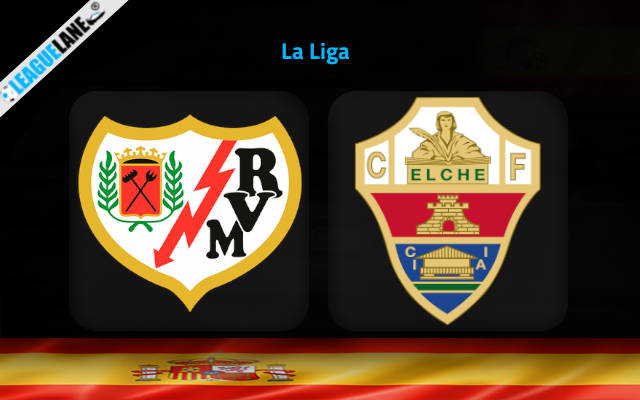 Rayo Vallecano and Elche will drop the curtain on Matchday No 7 in La Liga on Monday evening when they come across each other at Estadio de Vallecas.

The hosts will be hoping to bounce back from a 3-2 loss at Athletic Bilbao in the previous round. They will have a nice chance to do so here against Elche who have managed to claim just a single point in the opening six outings.

This is enough for the very foot of the league standings as Elche own the weakest defensive record and one of the worst attacking records in the competition at this stage of the season.

We can thus argue that Francisco’s job is well on the line and his destiny might easily depend on the outcome of this clash against Rayo Vallecano.

There is really not much to back Elche here in Madrid because the visitors have indeed been the worst team in the division so far in the season.

Their lone point came in the second round and was a courtesy of a 1-1 draw at home to newly-promoted Almeria.

Head coach Francisco can be especially worried regarding his team’s defensive line because Elche allowed at least three goals in each of the last three defeats to Villarreal, Athletic Bilbao, and Barcelona.

Rayo Vallecano have scored two goals in each of the last two league games against Valencia and Athletic Bilbao.

We will back them to do so for the third time in a row here against the worst defense in the entire league. The home win is paid at the 1.70 odds, while you will get somewhat higher 1.90 odds for Rayo to net two or more goals on Monday night.