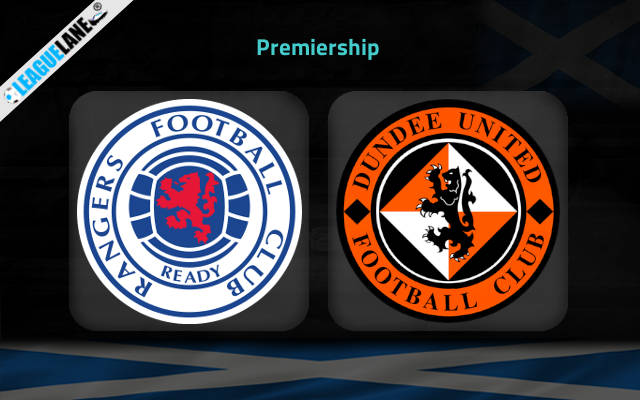 Rangers will look to stay in the title race as they lack only 6 points from the table toppers. They will welcome the fourth placed Dundee United to their Ibrox Stadium this Sunday hoping to snatch all 3 points.

Rangers is at the 2nd spot on the standing with 80 points from 35 games. They won 24 times in the league while drew on 8 and lost on 3 other occasions. The Gers are 6 points behind league leaders Celtic, meaning that this has to go down as a must win game for the home side. Also, they have secured a spot in the UCL next season.

Rangers will play in this fixture after a 1-1 Premiership tied result over Celtic. They have seen scored against in 5 of their previous 6 matches, leaking 5 goals in the process. The hosts have put together a good run of form and has now gone 3 games without defeat.

On the other hand, Dundee United resides below them at the 4th position on the table with 44 points. Of the 35 matches played, they won and drew 11 games each while losing on 13 other occasions. They aim to retain their spot in top 5 probably on to play at ECL , but this one will not be going easy on them.

Dundee United will come into the game after a 1-0 league win against Motherwell in their most recent fixture. They haven’t lost a match in 10 of their last 12 matches in Premiership and have scored at least one goal in each of their last 10 league schedules.

Rangers won 12 out of the 17 home games played this season. They had no trouble finding the back of the net recently and has scored in the last 17 home games.

Meanwhile, Dundee United won only 3 away games played this season. They are left without a victory over Rangers when having played them away from home in the previous 6 league matches.

By the looks of things, expect a victory for the home side this Saturday.