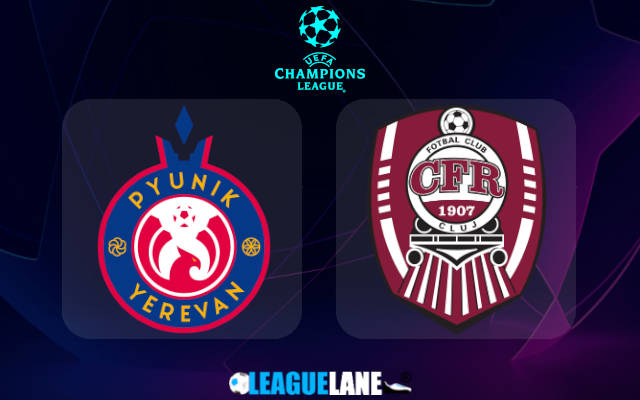 The reigning Armenian champions are huge underdogs for this match, but the Romanian heavyweights have problems of their own having failed to make it out of the qualifiers in four consecutive attempts.

Pyunik are returning to the Champions League qualifiers for the first time since 2015. They achieved it by beating cross city rivals Ararat Yerevan by 1 point.

Cluj, on the other hand, clinched the Romanian Liga I title for a fifth consecutive season. However, they had a tough competition from FCSB, the rivals from Bucharest falling one point short in the end.

Head-coach Dan Petrescu have some work to do on Tuesday with his team failing to reach the group stages on Champions League in last four seasons.

Also, they made it to the play-offs only once during this period and that was in the 2019/20 season.

Last season, they were eliminated in the third round by Young Boys on a 4-2 aggregate. Then, a ticket to the Europa League group stage was denied by Red Star Belgrade with a humiliating 6-1 loss.

Their sting in Europe further extended to a Conference League appearance. Once again, they were disappointing with the team finishing at the foot of the table. They managed a humble 4 points via a win and a draw from six games.

This will be the first official meeting between FC Pyunik and CFR Cluj.

As mentioned at the start, Cluj are huge favourites and we believe they will snap a huge advantage at the end of 90 minutes at Yerevan.

Therefore, the visitors to win by 2 or more goal difference is our recommended best bet for this champions League qualification fixture.

We will take the over 2.5 goals bet along with it, the odds priced at evens are too good to turn down.