LeagueLane
Home Articles Who will end the 22/23 Premier League Season with the Golden Boot? 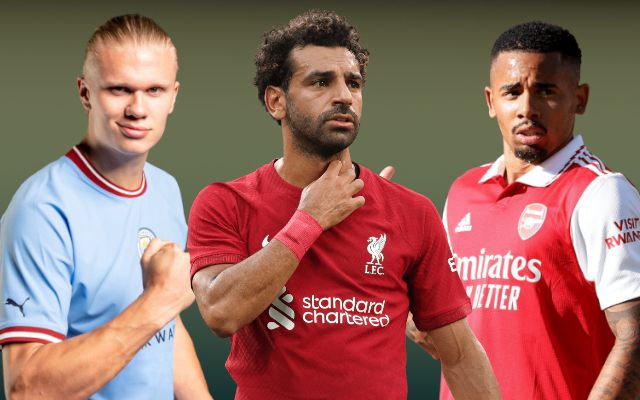 England’s Premier League is one of the most watched and most supported leagues on the face of the earth, with some going as far as calling it the most competitive league in the world. The league promises everything. Breathtaking goals, scintillating attacks, rock-solid defences, and everything in between.

With many of the Premier League’s top players spending considerable money on new strikers, bookmakers have relished the opportunity to release odds for who will be the top scorer and subsequent golden boot winner at the end of the season.

With the help of mybettingsites.com/za, this article lists the top 5 players who are favourites to win the golden boot according to leading betting site Betway.

Possibly the most anticipated signing of the summer transfer window, Haaland’s move to City has been on everyone’s lips. The Norwegian striker’s record speaks for itself. Wherever he’s gone, and in whichever competition he’s played, he’s scored bucket loads of goals. The 6 ft 5 Viking is an out-and-out goal getter with an enormous presence in front of the goal, with pinpoint precision.

It is no wonder that Betway has dubbed him as the favourite to get the most goals this season. At Red Bull Salzburg, he registered a staggering 17 goals in 16 appearances for the club, and while at Borrusia Dortmund, he managed 62 goals in 67 appearances.

Mo Salah has been the undisputed king of goal involvements since his unveiling at Anfield back in 2017. When Salah joined, people were expecting a solid winger who could get the odd goal and assist. No one was expecting the Egyptian to become one of the best (if not the best) players in the world during his time at the Reds.

In 182 appearances for Liverpool, Mo Salah has amassed a total of 119 goals, which is a staggering amount considering the competitive nature of the league. He has been a fundamental part of Liverpool’s recent success, and in all honesty, has been the Reds’ talisman.

Having bagged plenty of awards in his time in the Premier League, including countless players of the month awards, Golden boots, and a Puskas award. Salah is the reigning golden boot holder, having shared the award with Heung Min Son in the 21/22 season,  and is Betway’s next favourite to win the award with odds of 5.50.

An evergreen contestant for the Premier League Golden Boot is Harry Kane. The Englishman burst onto the Premier League scene in 2014, and while many rival fans dubbed Kane as a one season wonder at the time, his performances and goal record have stood the test of time, securing him as one of the elite strikers in world football.

Kane’s goalscoring record since he became a regular starter for Spurs is impressive, having not recorded a season scoring less than 17 goals in the Premier League. Harry Kane has managed three golden boots in past seasons at Spurs, and his famed partnership with Heung Min Son means that he is bound to find the back of the net regularly next season.

Betway has pegged Kane as their third favourite to pick up the Premier League golden boot, with odds priced at 7.00.

With some calling his move to Arsenal one of the signings of the summer, a lot is expected of the City forward in this upcoming season in North London. Jesus enjoyed a huge level of success at the Etihad stadium, but always seemed to play second fiddle to the likes of Sergio Aguero. After Aguero’s departure to Barcelona, Gaurdiola was reluctant to show faith in Jesus, who continued to contribute to City’s title winning season from the bench.

After City bolstered their attack with the signings of Erling Haaland and Julian Alvarez, Gabriel Jesus was given the green light to explore other options, and with Arsenal’s interest in the forward having been made known months before, it felt a lot like a match made in heaven. Jesus had worked with Arteta back at City when the Spanish manager was Gaurdiola’s understudy, and Jesus looks to be the perfect striker to fit the Spaniard’s Arsenal rebuild.

His previous goal scoring record doesn’t quite match the value Jesus can bring to the table, and with regular starting time in an exciting young team bound to give defensive lines headaches, Jesus is looking very likely to compete for the Premier League golden boot. Betway have provided odds of 7.75 for the Brazilian to pick up the coveted top goal scorer award, and with two goals in two games, it certainly isn’t impossible for him to have a groundbreaking season.

Another one of the most anticipated signings of the summer, Darwin Nunez to Liverpool has been on everyone’s lips. Many have been pitting Nunez against Haaland as the battle of the Premier League season, as both players are coming into to the two top teams competing for the Premier League title, and both are entering the league in scintillating form.

Unlike his so-called biggest competitor, Haaland, Nunez’s career really took off last season for Benfica, after netted 26 times in 28 games for the Portuguese giants. Prior to that, he managed 16 goals in 30 appearances for Almeira in Spain’s second division, and 6 goals in 29 appearnaces for Benfica in his first season in the Primeira Division.

When you move to a club like Liverpool, it’s no doubt that your performances come under fire, and while he shone in the pre-season, and already managed a goal and assist in his first game in the Premier League, much is still expected of Nunez to prove himself. What the striker has proven so far, is a high level of passion, with a further high level of aggression, having already seen red after headbutting Chrystal Palace defender Joachim Andersen in gameweek 2.

Nunez is  Betway’s 5th pick for the most likely to pick up the Premier League golden boot, having been given odds of 14.40.