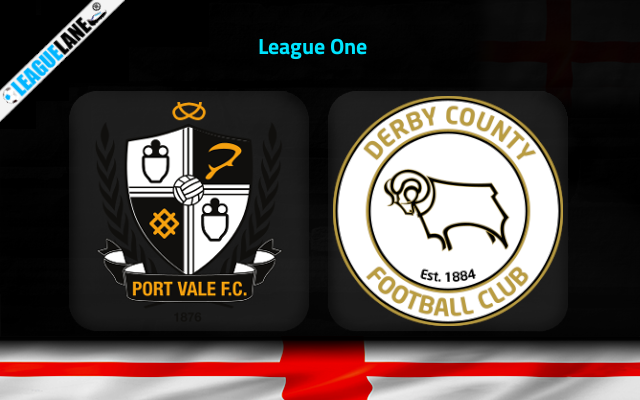 Port Vale vs Derby Predictions and Free Tips from our expert tipsters when the teams go head-to-head in the England League One on Tuesday, 24 January 2023.

Port Vale is having an inconsistent form at the moment. They have lost three of the past five league matches and have dropped into 13th position in the standings.

On Wednesday, they will be facing an in-form Derby who have won the past four league fixtures in a row. in fact, they are on a 13-fixture unbeaten streak at present.

Derby was unbeaten in six of the past eight head to head matches against Port Vale. The reverse fixture ended in a 1-2 win for Port Vale.

Derby is on a two-game winning streak at this venue against Port Vale. They have netted in a total of 6 goals over the course of those two games.

Who will win the match between Port Vale vs Derby?

Derby is on a six-game unbeaten streak on the road. On the other side, Port Vale were winless in four of the past seven home matches.

Moreover, Derby have a good h2h form against Port Vale in the recent tradition. Therefore, we expect a win for Derby.

We expect Derby to have the total control of this match and they have been recording low-scoring matches consistently since the beginning of this season. In that case, we don’t expect this match to have goals over 2.5 ft.

Derby owns the second best defensive side of this competition. They have kept a clean sheet in four of the past six league matches. Their impressive defensive side forces us to expect a one-sided affair on Wednesday at Vale Park.

Derby have the best form in the league at present. Apart from winning the past four consecutive matches, they are on a long unbeaten streak which itself is more than enough to consider them as favorites here.

We therefore like to place Derby to win at 2.15 odds as the main betting option while placing the under 2.5 goals ft option at 1.70 odds as the second.