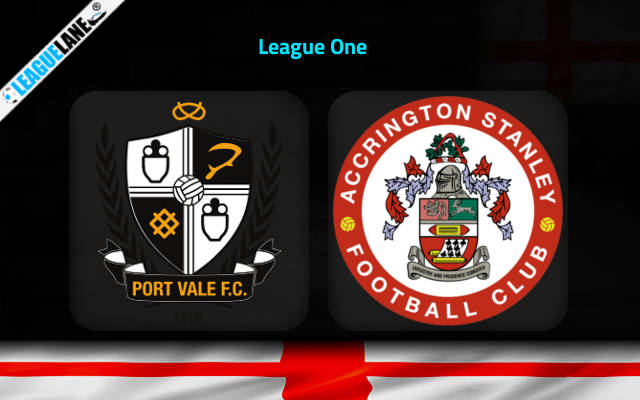 Port Vale vs Accrington Predictions and Free Tips from our expert tipsters when the teams go head-to-head in the England League One on Tuesday, 7 February 2023.

Port Vale is having an inconsistent form at the moment. They have lost three of the past five league matches and have dropped into 13th position in the standings.

However, they will have a great chance on Tuesday as they faces the second worst team of this season, Accrington as their visiting rivals. The guests have lost a total of 13 matches which is the combined total of their wins and draws. This season.

The past four overall wins was evenly split, with two each for both teams. Their most recent meeting ended in a 5-1 win for Port Vale.

At this venue, Port Vale won four of the last five encounters against Accrington. They have netted in a total of 14 goals over the course of those five encounters.

Who will win the match between Port Vale vs Accrington?

Both Port Vale and Accrington are on a three-game losing streak at home and on the road respectively.

However, the opponents Port Vale locked horns with in those three matches are sitting inside the top half in the standings at present.

Moreover, Port Vale have an upper hand in the recent tradition of this match-up here. Therefore, we expect a win for Port Vale on Tuesday.

We expect Port Vale to have the control of this match. Going on, The Valiants have recorded over 2.5 goals ft often lately. We therefore anticipate a high-scoring match as their opponents are Accrington sitting second from the bottom of the standings.

Neither of these two teams are having a decent defensive line in this season. Thus, we expect goals from both ends of Vale Park on Tuesday.

Neither of these two sides are having an impressive run in the league at present. We have already mentioned about their poor form earlier and Port Vale’s comparatively better form forces us to back them here.

Port Vale to win at 1.91 odds is our main betting pick for this match. Both teams to score at 1.75 odds seem to be a decent alternative considering the defenses of both.