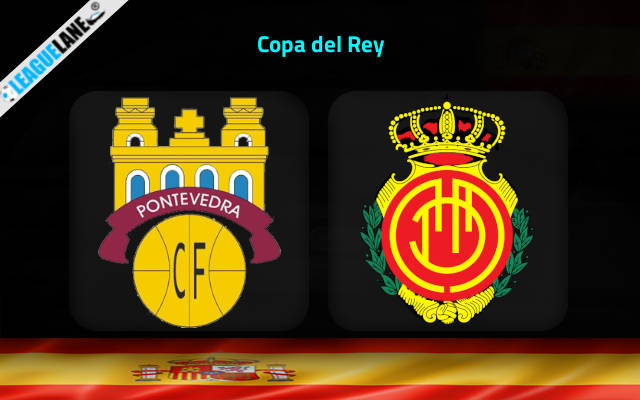 Pontevedra vs Mallorca Predictions and Free Tips from our expert tipsters when the teams go head-to-head in the Spanish Copa Del Rey on Wednesday, 04 January 2022.

Pontevedra are not pulling up any tress of late. In the Primera Federation table, they reside inside the relegation spot at present. They will have a tough task on Wednesday as they faces a Mallorca.

Going on, Mallorca are having an inconsistent form in Laliga since the beginning of this season. They are at 11th spot in the standings and are in possession of an average offensive and defensive line.

However, such numbers does not count much here as they are in for a match with Pontevedra, who sits inside the danger zone of Spanish third tier.

This will be marked as the first head to head meeting between these two outfits.

Who will win the match between Pontevedra vs Mallorca?

Mallorca to win is the safe bet here. They were unbeaten in four of the last five league outings and won the previous two Copa Del Rey matches.

Victories over the likes of Atletico Madrid, Villarreal etc in the recent Laliga fixtures displays their potential of sealing an easy win here.

Mallorca had netted in a total of 7 goals over the course of the last two Copa Del Rey games. Their attacking side alone assures an over 2.5 goals ft display here.

On the other side, Pontevedra have managed to seal a 2-1 victory against Tenerife in the previous round of Copa Del Rey. Hence, over 2.5 goals ft seem to be a decent pick here.

Pontevedra have managed to score two against Tenerife in the last round of this competition. They seem to have the potential of scoring one here but the defensive steel of their counterparts are not that easy to break of late.

Therefore, we expect a one-sided affair at Estadio Municipal de Pasaron on Wednesday.

Considering all these observations, we like to place Mallorca to win as the main bet at 1.53 odds.

Over 2.5 goals at 1.93 odds seems to be ideal for placing as an alternative as Mallorca have the potential to pull a high-scoring display on Wednesday.