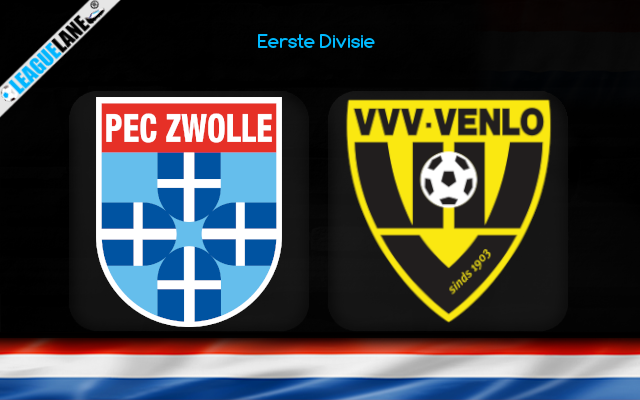 PEC Zwolle vs VVV-Venlo Predictions and Free Tips from our expert tipsters when the teams go head-to-head in the Netherlands Eerste Divisie on Friday, 20 January 2023.

PEC Zwolle will head into this game after a 0-3 win against Heracles in their previous Eerste Divisie outing. They are on a six-fixture winning streak at the moment.

Zwolle will face VVV-Venlo as the visiting rivals for their Saturday’s league fixture. Venlo is currently at 6th position, four spots below their counterparts in the league standings.

PEC Zwolle can also rely on the recent tradition since they won the past two encounters against VVV-Venlo. The reverse fixture finished in a 0-4 win for Zwolle.

Another thing that needs to mentioned is, all their last five meetings had goals in plenty. Especially at this venue, four of the past five matches saw the landing of over 2.5 goals ft.

Who will win the match between PEC Zwolle vs VVV-Venlo?

Zwolle won the past three home matches in a row and head into this match following an away win over Heracles, who sit at second spot in the standings.

Venlo is also having an impressive form lately, especially on the road. They are on a four-game unbeaten streak on the travels.

However, the edge is still for Zwolle as they have an upper hand in the recent history of this tradition. Therefore, we expect the hosts to seal a victory in this highly competitive affair.

The exceptional run of the offensive side of PEC Zwolle is more than enough to expect this match to have over 2.5 goals. For additional stats, more than 50% of the matches played by these two had goals over 2.5.

Both the teams are in a great form in the league lately. The competitive potential they possess inclines us to consider the possibility of a both teams scoring scenario.

Zwolle’s consistent form have allowed them to take control of the top spot at the moment. However, they have to secure it as Heracles are level on points with them. Despite having an in-form Venlo as opposition, we expect Zwolle to bag a three pointer here.

PEC Zwolle to win at 1.55 odds will be our first betting tip here. For the second tip, we like to back the both teams to score and over 2.5 goals option at 2.00 odds.