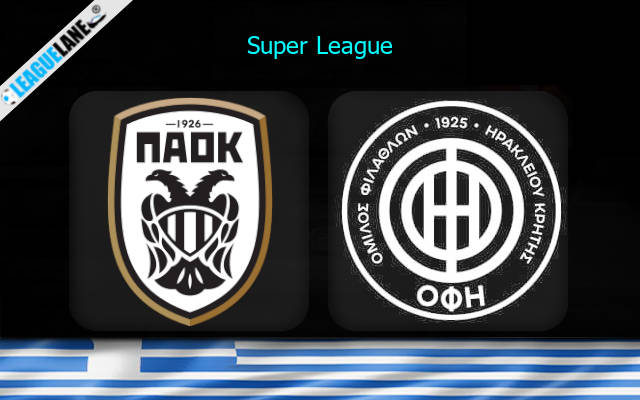 PAOK vs OFI Crete Predictions and Free Tips from our expert tipsters when the teams go head-to-head in the Greek Super League on Saturday, 14 January 2023.

Not only are PAOK in great form, but they are a title-contender too. In fact, based on recent form, they are by far the best in the Super League.

Meanwhile, Crete have just three wins to their name all through the campaign, and on top of that they have a poor h2h record against this rival over the years.

PAOK have a phenomenal h2h record against this opponent. In fact, on top of being unbeaten against this foe since 2018, the team also managed to win 11 of the previous 13 clashes.

And it is unbelievably impressive that they managed to score three or more goals in the last nine encounters at this stadium in a row. As a matter of fact, the hosts scored four or more goals in five of these nine fixtures.

Who will win the match between PAOK and OFI Crete?

After October, PAOK have a perfect winning record barring a draw. And at home they won every single one of their appearances in the last two months.

On the other hand, Crete could post just three wins in the entire league campaign, and they have an embarrassing h2h record against this rival. By all means, hosts PAOK are massive favorites this weekend.

As mentioned before, previous h2h clashes have been goal-fests. And particularly at this venue, the hosts have been near unstoppable.

Once again PAOK are in great form, while their counterparts are struggling to perform. Chances are very high that we are about to see another high-scoring match-up this Saturday.

The hosts have shown unbelievable dominance in h2h meetings over the years. And at present, they are the best team in the league too. It is a doubt how much of a challenge the struggling Crete could pose for them.

Possibility of the guests finding the back of the net is rather low.

PAOK have a 100% winning record at home in the last two months, and they scored in plenty all through this stretch. They managed to do the same in former h2h clashes too.

Going on, Crete are currently in a struggling phase. Particularly on the road they have been a huge mess, and are under huge pressure.

Going on, the Over 2.5 Match Goals at an odd of 1.85 is a superb choice to be made. Goals have always come in plenty in h2h meetings (with PAOK being the major reason), and more of the same is expected this Saturday too.