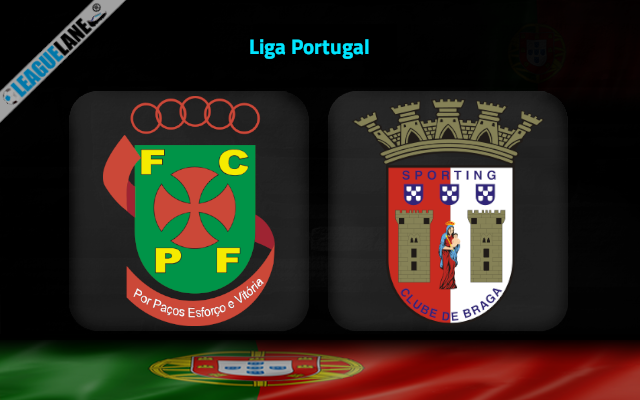 Pacos Ferreira vs Braga Predictions and Free Tips from our expert tipsters when the teams go head-to-head in the Liga Portugal on Saturday, 21 January 2023.

Pacos Ferreira is not pulling up any trees since the beginning of this season. They have the worst form in the whole competition and are sitting at bottom of the league standings.

Meanwhile, Braga have managed to bag a total of 12 points from the last four league outings. They are sitting second in the league table and are in possession of a strong attacking and defensive side.

Braga can also rely on the recent tradition since they won the last two encounters against Ferreira. The latest meeting had finished in a 2-0 win for Braga.

At this venue, Braga won three of the past five clashes against Ferreira. They have netted in a total of 15 goals from those five matches.

Who will win the match between Pacos Ferreira vs Braga?

Braga should be able to seal a win here because the hosts are yet to seal a victory at this venue so far in this campaign.

Ferreira’s dreadful run at home with Braga’s four-game winning streak on the road, is more than enough to select a winner here.

Braga have been scoring goals at a good rate lately. Their attacking stats in the past five h2h clashes at this venue alone suggests an over 2.5 goals ft scenario here. Since their current goal-scoring form is also impressive, expect this match to have goals over 2.5.

The defensive side of Braga is so solid. Ferreira’s attacking side which failed to score in three of the past four home matches, doesn’t seem capable of scoring here against Braga. Therefore, we are expecting a one-sided affair on Saturday.

Braga have a great chance to maintain their winning streak and to secure their spot in the standings. There is nothing much to expect from this Ferreira side who have lost 75% of games they have played so far in this campaign.

The guests are pretty big favorites to claim the wins here. We are expecting a 0-3 win for them and like to place it as the main betting tip at 10.00 odds. For the second tip, over 2.5 goals at 1.88 odds seems decent.