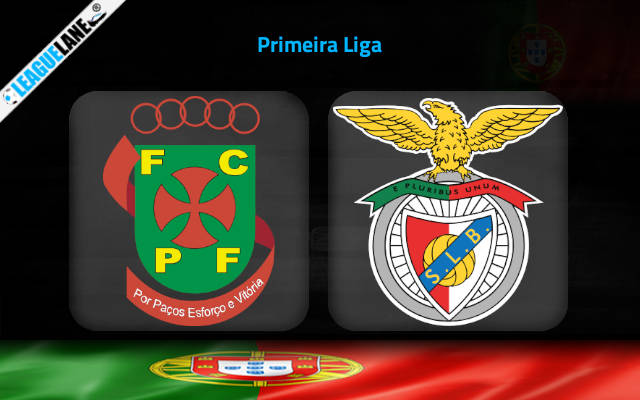 The last match of this season will see the mid-table side Pacos de Ferreira hosting the third placed Benfica at Estádio da Capital do Móvel, this Friday.

The Eagles are at the 3rd spot on the standing with 71 points from 33 games. They won 22 times in the league while drew on 5 and lost on 6 other occasions. The visitors have booked a spot for the Champions League qualifiers next season after failing to catch up with Sporting CP. They have the second best netting numbers this season with 76 in total.

Benfica lost by 0-1 at home to Porto last Saturday to watch their rivals secure the Primeira Liga title on their own turf. That loss snapped their 4-match unbeaten run in the league and made them to stuck fast to the third place in the table. At this point, they have nothing to play for and will be aiming to end the season with a high note.

On the other hand, Pacos de Ferreira resides at the 10th position on the table with only 38 points. Of the 33 matches played, they won 9 times in the league while drew on 11 and lost on 13 other occasions. They have nothing to play for in this dead rubber of a match on Friday night as they could neither get a European spot nor will fall into relegation at this point.

The home side will be wanting a better result here after the 2-0 Primeira Liga defeat in their last game at the hands of Santa Clara. That defeat marked their second loss in the last 4 games.

Meanwhile, Benfica won the last 9 h2h games over this foe across all competitions. They also remain unbeaten in their last 2 league matches away from home.

Considering their impressive h2h dominance, we feel that an away win is likely to occur this Friday.