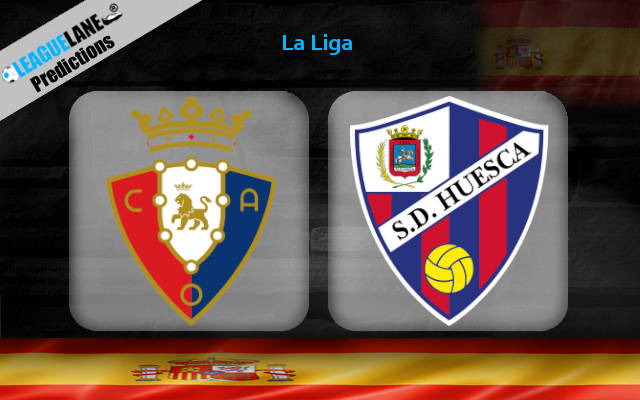 Two consecutive losses in the league have pulled Osasuna down to the 13th spot in the table.

The host is on a two-game losing streak in the campaign, following a 1-0 loss on the road against Sevilla last time out in the schedule.

They have picked up 10 points from 3 wins and a draw in their eight league appearances in the campaign.

Winless in the league so far, SD Huesca is at the ultimate bottom of the table this season as it stands. The visitor has lost only three of their nine league clashes in the campaign.

Having lost two of their recent three fixtures in La Liga, they will visit on the back of a 1-1 draw at home with Eibar in their previous encounter.

Osasuna has lost the last two matches in the campaign and has only one win in the recent five fixtures in their overall schedule. The host enjoys the ground advantage in the game and has a four-point lead over the traveling side in the league.

Los Rojillos has a mixed form in the league with 3 wins and 4 losses in their eight clashes. This gives a slight edge for the home team against the promoted team that has won none of their fixtures until now. Besides, the away team has a poor form on the road as two of the last three outings ended in a defeat.

With their ground advantage and league experience over the promoted side, the host is likely to create more chances in the encounter. The double chance favoring Osasuna will probably be the best bet in the encounter to yield decent returns.