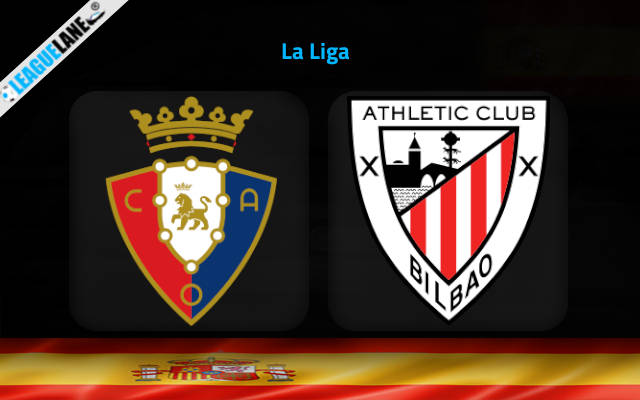 Based on everything we have seen so far in the season from both sides, the draw should be the most likable of the three outcomes here.

Athletic Bilbao drew in seven of nine league games on the road this season with an incredible goal difference of 4-4 along the way.

On the other side, we have Osasuna who drew in five of their nine home outings this term. Both teams have scored 17 goals so far in the season.

Athletic Bilbao have played one game more, it was a 1-2 home defeat to Real Madrid in their previous league fixture.

Athletic have won only one of the last ten league games. The victory came in Matchday No 18 when they saw off Real Betis 3-2 after a late second-half comeback.

Osasuna, on the other side, fell 1-0 at Getafe in their previous La Liga action, conceding a late stoppage-time goal on the occasion.

Arassate’s men are winless in four successive home outings, three of which have ended in stalemates.

Only one of the last five outings they played at home saw three or more goals scored.

The low-scoring draw has to be the way to go here. We really like the Under 2.5 goals FT pick knowing the visitors own a goal difference of 4-4 in nine league games on the road this term.

Knowing that just one of the last five outings Osasuna played on the home patch provided three or more goals, we have to take the 1.53 odds for the Under 2.5 goals FT pick. The braver tipsters can try with draw at the odds of 3.00.