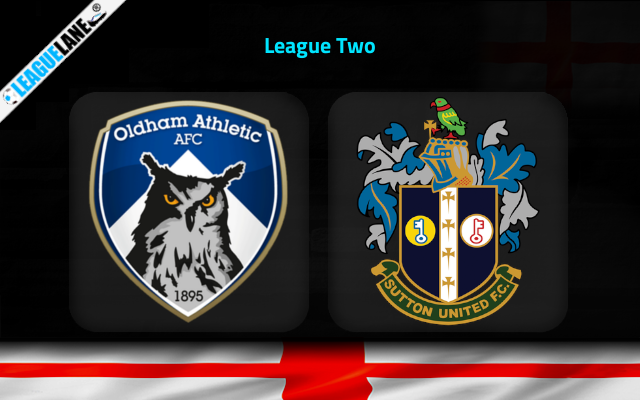 Oldham have been disappointing their supporters since the beginning of this season. They have a dreadful form so far this campaign. As a result, they sits 23rd on the table, inside the relegation spot with a total of 31 points in hand.

Oldham recorded a 0-2 defeat against Exeter at home in their most recent league fixture. With that lose, they are now having a winless streak for 6 subsequent league fixtures. They have seldom won at all and will be having lack of motivation to enter their next league outing.

Meanwhile, Sutton United have an inconsistent form in the league of late. They sits 9th on the table with the hope of entering the safe zone which is three points away from them currently. They have a decent offensive and defensive lineup.

Sutton played a 1-1 draw at home against Tranmere in their most recent league fixture. With that draw, they are now having a winless streak for three games. However, such a set won’t be affecting their spirits of entering the next league fixture positive.

By the looks of things, we can see Oldham having a poor form so far this season. Therefore, we expect them to be on the losing side at the end of this League Two fixture against Sutton United at Boundary Park on Tuesday.

Oldham are winless in 7 of the past 10 home league fixtures. They lost 5 of that 7 by leaking goals at a good rate.

On the other side, Sutton are unbeaten in 4 of the past 7 league fixtures on road. They have scored goals in 6 of the past 8 on road fixtures.

Analyzing the current form of both these teams, we expect Sutton United to pick up three points from this fixture.