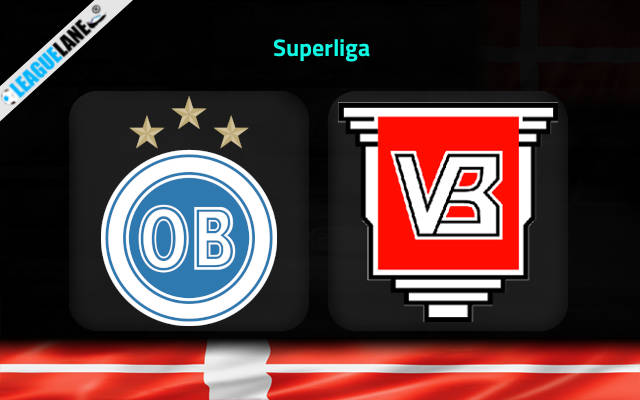 Currently in the zone for relegation to 1st Division, Vejle will take a roadtrip to Nature Energy Park, this Friday hoping to turn the tables against Odense who lead them by 8 points.

The Striped are at the 9th spot on the standing with 25 points from 24 games. They won 5 times in the league while drawing on 10 and losing on 9 other occasions. The hosts lost twice of their last 5 fixtures and they need some room for improvement their defensive side.

Odense prepare for this match following a 2-2 league draw over SonderjyskE. At least three goals per game were seen in 5 of the past 6 meetings where they have participated. Opposition teams scored 12 of them in this period whereas Odense managed to get a total of 10.

On the other hand, The Reds resides at the relegation zone at the 11th position on the table with only 17 points. Of the 23 matches played, they won only 4 games while drawing on 5 and losing on 14 other occasions. Their total goals to conceding ratio stands at 21:48 showing far from perfect front and back ends.

Previously, Vejle BK had a goal-less draw in the Superliga tie with AGF Aarhus. A tendency of at least one team not scoring a goal in games featuring them has become fairly consistent recently. Checking on their last 6 meetings reveals that it has happened 5 times.

Odense lost only once from their last 5 fixtures held at home across all competitions. Coming into this fixture, they are currently on a 2-game unbeaten run in the league.

Heading into this fixture, Vejle BK have not won away from home in their last 15 league games. They even failed to score a goal in the last 4 away league schedules, losing twice in them.

Considering the poor away form of the visitors and a slight better home form of Odense, we feel that a home win is likely to happen this Friday.