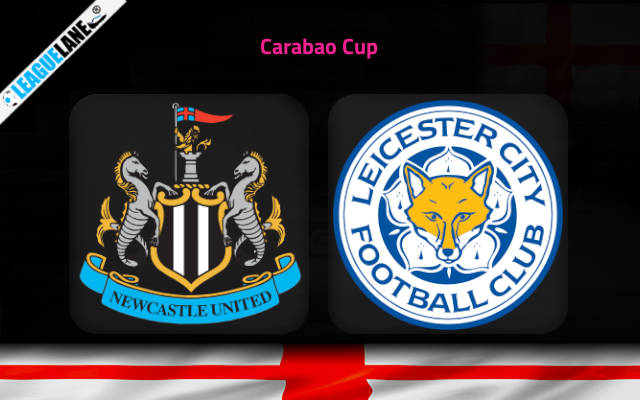 Newcastle vs Leicester Predictions and Free Tips from our expert tipsters when the teams go head-to-head in English Carabao Cup on Tuesday, 10 January 2023.

Newcastle are really shaking things up in the English top flight this season. They are gunning for a podium spot as things stand, and for sure they will be prioritising a deep run in the Carabao Cup.

Meanwhile, the Foxes have been a shadow of the team they once used to be. They started their campaign on such a disastrous note, that at one point they were a contender to get relegated. Even now it cannot be said that they are in safe waters.

Recent h2h encounters have solely been dominated by Newcastle. The latest such clash ended in a 0-3 win for them, and the one before that ended in a 2-1 victory at home for the team.

It is also noteworthy that a majority of h2h meetings between the two teams have been goal-fests. In fact, the last eight h2h fixtures on the trot had three or more goals.

Who will win the match between Newcastle and Leicester?

Newcastle for sure are the favorites here. They are placed third in the PL table at the moment, and all through the campaign they lost just once. Defense has also been a major strength for them – with the team having conceded the least goals in the league.

At the same time, the last Leicester registered a win against a team from the top flight was back in early-November. They are struggling with their defense, and also have a poor h2h record in recent years.

Newcastle are in fine form, and will be eager to test the frail backline of the Foxes. They have consistently scored in h2h meetings over the years. Likely, expect goals in huge numbers.

This is rather unlikely to happen. The hosts have been phenomenal in defense this season. They kept clean sheets in their last four PL matches in a row – which included encounters against Chelsea and Arsenal.

Newcastle have been impressive throughout this current season, and have shown real intent to transform themselves into one of the titans of the English top flight.

They also have a confidence-boosting h2h record against this opponent in the last few years, and to make matters further easy for them – Leicester have been in disaster mode right from the start of the campaign. As such, the Newcastle to Win wager placed at 1.67 odd looks very promising.

On that same note, the Over 1.5 Team Goals by Newcastle bet at an odd of 1.70 is another great pick to be made this Tuesday.