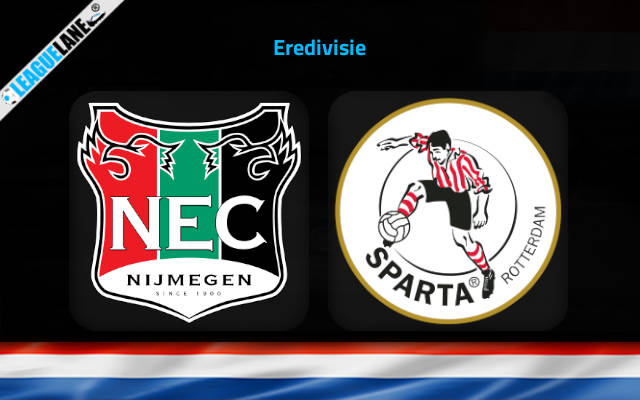 NEC Nijmegen vs Sparta Rotterdam Predictions and Free Tips from our expert tipsters when the teams go head-to-head in Dutch Eredivisie on Saturday, 28 January 2023.

Sparta have been on a consistent run throughout the campaign, and are in possession of the sixth spot at the moment. They need a surplus of three points to climb level with the third-placed PSV, and this will be their new objective going forward.

Meanwhile, Nijmegen have registered just four wins in total so far this whole league campaign. And of their two wins at home, one came against the relegation-threatened Emmen.

Who will win the match between NEC Nijmegen and Sparta Rotterdam?

Sparta have a phenomenal h2h record against this opponent in the past eight years, and they are also in great form in the league at the moment. In fact, their latest defeat in the Eredivisie came more than three months back, and they lost just twice on the road since April.

On the other hand, Nijmegen have just three league wins to their name at home in the past 15 months. They are on the back foot for sure this Saturday, and are expected to have a disappointing performance against Rotterdam.

Sparta scored three or more goals in three of their last five road trips, and also scored goals in huge numbers throughout the last eight years in h2h meetings.

Meanwhile, the last Nijmegen failed to score at home was back in August, and scored three or more goals in four of their preceding five appearances at home.

Likely, anticipate a high-scoring match-up between the two teams this weekend.

Rotterdam might be the favorites this weekend. But do note that it’s been five months since Nijmegen failed to score at this venue, and they even scored 16 goals from their past five home fixtures.

Despite the guests having the upper hand this Saturday, it might be hard for them to keep a clean sheet.

Sparta have an unbeaten record in h2h clashes in the last eight years, and they are also in great form in the league at the moment. In fact, they are one of the very few teams to have remained unbeaten in the last five game weeks, and lost just twice on the road in the past nine months.

On the other hand, Nijmegen registered just three league wins at this stadium in the last 15 months, and one of these even came against the 15th placed Emmen.

It appears that Sparta Rotterdam have the edge this weekend at the Gofferstadion. The odds for their win are placed at 3.20.

Going on, in spite of their struggles, Nijmegen scored 16 goals from their last five home fixtures, while Rotterdam scored three or more goals in four of their past five road trips. And neither team has been fairly consistent with their defense this season as well.