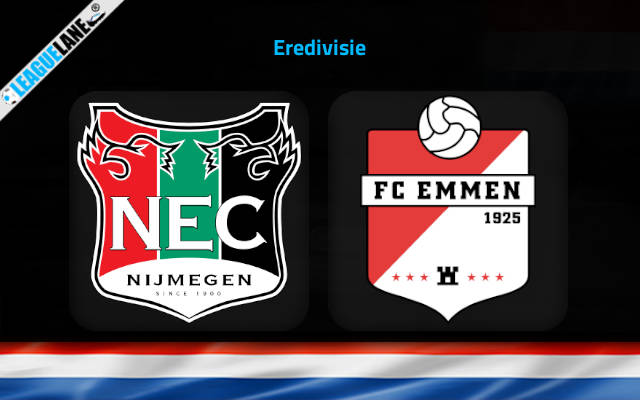 NEC Nijmegen vs FC Emmen Predictions and Free Tips from our expert tipsters when the teams go head-to-head in Eredivisie on Saturday, 21 January 2023.

NEC have shown quality as they are on a four-game unbeaten streak. They defeated Almere in the second round of the KNVB Cup by 4-0. They impressed everyone when they held title contenders Ajax to a 1-1 draw earlier this month.

One common thing is that both teams have performed well in the KNVB Cup. As Emmen defeated VVV-Venlo by 3-2 in the second round of the KNVB Cup. In their last league outing, they held Cambuur to a goalless draw.

The visitors have not won a game against this opposition at this ground since 1996. Another interesting fact is that both teams will be playing against each other after a period of four years. The host won the last game by 4-1.

Who will win the match between NEC Nijmegen and FC Emmen?

Both teams have scored plenty of goals in the KNVB Cup, however in the league, the visitors are yet to score a goal since the beginning of this month. Also, NEC scored only one goal which was against Ajax earlier this month.

You can back the following, as our first tip is that this game will end in a draw– at 3.60 odd. Both teams are yet to win a league game in the month of January. Moreover, it unlikely that Emmen will win as they are in the relegation zone.

Moving on, our second tip for this game is that Under 2.5 goals will be scored – the odd for this tip will be at 1.85. Both teams are facing a goalless drought in their league fixtures. Therefore, we can expect this trend to continue.