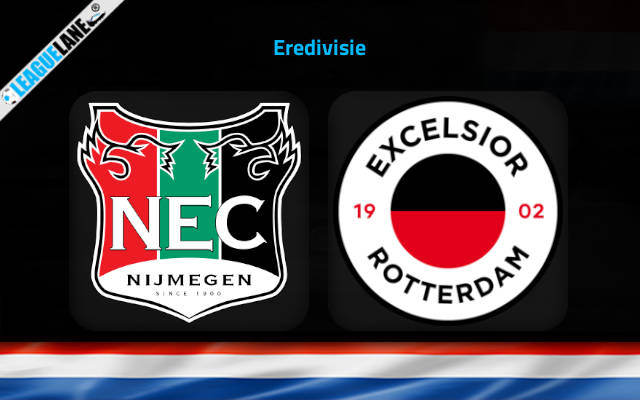 NEC have won a total of nine points this season out of which six points were from draws. This is the only reason they are not in the bottom half of the table. They will look for a win this Saturday as they will host rivals Excelsior.

The host have won only a single game this season. In their most recent game, they had to settle for a 1-1 draw against Feyenoord. Ivan Alvarez was the goal scorer for Rogier Meijer’s side in that game.

The team is at the tenth position on the table following a six-game winless streak.

Meanwhile, the visitors have lost their last two matches exactly by a 1-0 scoreline. Most recently, they lost to Utrecht. In that game Marinus Dijkhuizen’s side managed to register three shots on goal, however they could not convert any of it into a goal.

It is worth knowing that they have lost four of their last five matches in the league. Moreover, they share a record with PSV this season. As they have not finished any of their games in a draw this season.

Marinus Dijkhuizen will be concerned about the defensive backline of the host, as they conceded only two goals in their last four league outings.

The most interesting thing to note is that the last six games have ended in a stalemate for the current host. No other team is having such a form this season. As a result 75% of their matches have ended in draw.

The host have a very decent defensive record so far this campaign. They are currently conceding goals at the rate of 0.75 goals per game. Moreover, the visitors have conceded twelve goals in their last five league matches.

Our prediction is that NEC Nijmegen will win with Both teams to score- the odd for this combined tip will be at 2.87. In the overall meetings, both sides have scored in the last five matches. Moreover, at Goffertstadion the host have won two of the last three Eredivisie fixtures against this side.

Our next tip for this game is that Number of goals will be between 2-3 – the odd for this tip will be at 2.10. In the last three consecutive fixtures, goals were scored in the range of 2-3 goals.