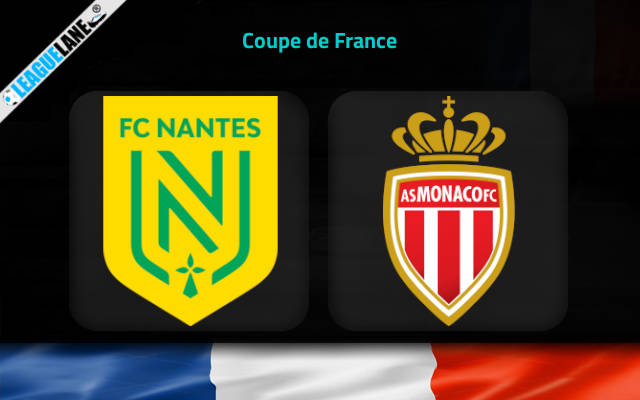 After an interesting turn of events in the quarter finals of Coupe de France, both the Ligue 1 teams are set for their eyes at the finals. Nantes are unbeaten since their last French Cup schedule while Monaco are struggling to secure a win in the Ligue 1 as of recent. On March 2nd, Monégasques will take a roadtrip to Stade de la Beaujoire hoping to punch their ticket to the finals after encountering with the Canaries.

Nantes cleared the round of 8 after a victory over Brest by 2-0. They then got advanced into the Quarter finals with Ligue 2 competitor Bastia who had previously defeated the French first-tiered opposition Reims by 2-1. Their clash ended in favour of the Canaries after taking an early lead through a penalty and sealing another one in the second half.

Nantes recently defeated PSG in the league by 3-1 thereby securing back to back league wins. They sit 7th in the league with 38 points from 25 matches played so far. With 11 wins so far they are level on points with Monaco who sit above them.

On the contrary, round of 8 for Monaco was scheduled against Lens and match ended in 4-2 and Monégasques got into the Quarter finals against the Ligue 2 opposition Amiens who previously defeated Nancy. Their encounter ultimately saw 2-0 at the end with goals in both halves.

Monaco drew the last two league schedules against Lorient and Bordeaux but they are undefeated in the last 3 Ligue 1 games. With 38 points, they are 6th in the league with 10 wins and 8 draws so far.

We feel that a win for Nantes is up for cards as they lost only thrice this season at home and they are unbeaten in the last 8 fixtures held at Stade de la Beaujoire across all competitions. Also, the visitors are only average at away schedules.