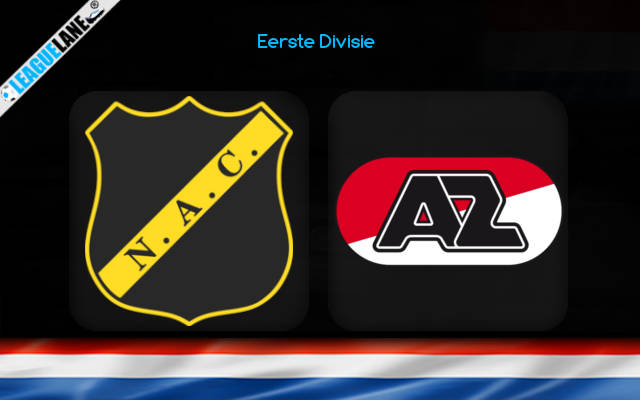 NAC Breda vs Jong AZ Alkmaar Predictions and Free Tips from our expert tipsters when the teams go head-to-head in Eerste Divisie on Friday, 27 January 2023.

A top-notch first half from Peter Hyballa’s men helped NAC seal all three points as they defeated TOP Oss by 2-1. They will now face Jong AZ for their final January fixture.

At the same time, Helmond Sport held Jong AZ to a 1-1 draw recently. They are seventh in the league and have made slow-paced progress this season, especially looking at their away from in the last three months.

Jong AZ won the October fixture of last year in an impressive 4-0 victory. This is their only victory against NAC in the last three years. NAC have won six of the last seven head-to-head matches against this opposition. Another important point to note is that at this stadium, Jong AZ are yet to win a game.

Who will win the match between NAC Breda and Jong AZ Alkmaar?

The main highlight is that the host are yet to lose a single game this month. They are on a three-game winning streak at this ground against Jong AZ. Therefore, the chances are high that NAC will take home all three points from this match.

Both teams have scored in two of the last three head-to-head encounters at Rat Verlegh Stadion. It is likely that both teams will find the back of the net this time as well.

NAC have a good history against this opposition as they have won six of the last seven meetings. Another important point to note is that Jong AZ have struggled to win at Rat Verlegh Stadion in the last two years. Considering all of this, our first tip is that NAC Breda will win this game– the odd for this tip will be at 2.20 odd.

A good second tip for this fixture would be that Both teams to score – at 1.66. The host have scored two goals in all of their January fixtures. A similar pattern is also observed in Jong AZ’s case as well.