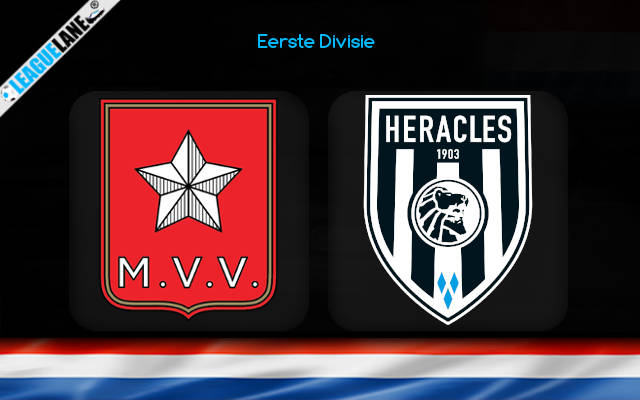 MVV Maastricht vs Heracles Predictions and Free Tips from our expert tipsters when the teams go head-to-head in Eerste Divisie on Friday, 20 January 2023.

MVV will most likely fall down in the table rankings if they don’t start winning games in the next few weeks. They are winless in four of their last five outings. Against a mid-table team like Den Haag they could not perform.

On the other hand, PEC Zwolle surprised everyone as they defeated Heracles by a huge 3-0 margin. This defeat momentarily stopped the visitors from reaching the top of the table. Now they will look to bounce back with a victory as they will face MVV.

The most important point to note is that MVV have not won this fixture in the last two decades.

Both teams last met back in August and the game ended in a 2-2 draw. Another interesting fact is that both teams will be playing at De Geusselt after a period of eighteen years.

Who will win the match between MVV Maastricht and Heracles?

The host are on a three-game winless run. At the same time, the visitors are second in the league and have a good away form this season. Therefore, we can back Heracles to win this game.

The last four head-to-head meetings between these two teams ended with more than three goals combined. We can expect the same trend to continue for this game as well.

The visitors are second in the league and have won this fixture on numerous occasions in the past. Do note that MVV are winless in four of their last five matches. Therefore, the first tip is that Heracles will win and BTTS – at 3.00 odd.

Our second tip is that the Correct score will be Heracles 2-1 – the odd for this tip will be 8.50. They have scored two goals in their last two wins away from home.