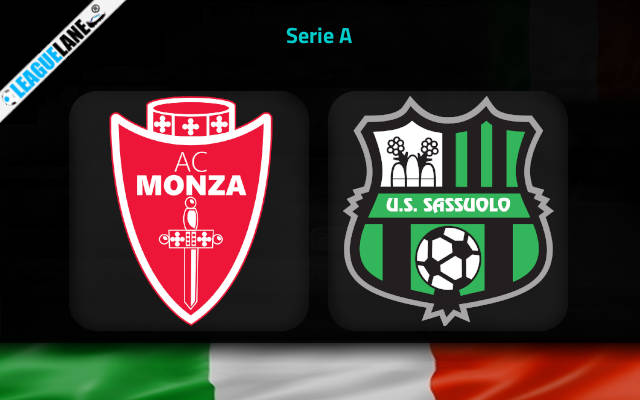 Monza vs Sassuolo Predictions and Free Tips from our expert tipsters when the teams go head-to-head in Italian Serie A on Sunday, 22 January 2023.

Monza have been really consistent after the World Cup break. In fact, their latest defeat in the league came two months back, and that too against Lazio. Do also note that they lost just once at home in the past four months.

Monza registered five of the past nine h2h wins in the last 20 years, and the last they failed to score against this opponent was back in 2007.

And importantly, five of the past six meetings had three or more goals – while four of them had four or more goals.

Who will win the match between Monza and Sassuolo?

On the other hand, Sassuolo are on a four-fixture losing streak, and they also lost eight of their past ten games. Moreover, they are on a five-game losing streak on the road, and have just a single win to their credit away from home since May.

Furthermore, Monza have the better h2h record in the past two decades, and all of these point towards them delivering a winning performance this Sunday.

In addition, majority of recent h2h clashes also had goals in huge numbers.

Likely, a high-scoring affair is expected this weekend between the two teams.

Monza might have the upper hand this Sunday, but they failed to keep a clean sheet in their last four fixtures – and they conceded eight goals during the stretch. And it is also quite concerning that the last they kept a clean sheet was 18 years back.

As such, chances are high for both teams to find the back of the net.

Monza have been performing at a high level in the last three months, and particularly so at home. They also have a dominant h2h record against this opponent over the years. Meanwhile, Sassuolo are on a long losing streak, and have been a total failure on the road even from the previous season.

In fact, they have a 100% losing record on the road in the past three months, and have a 100% winless record in away games since May – barring a single win.

Likely, Monza to Win at an odd of 2.25 will be a great tip for the weekend.

Going on, both teams are conceding goals in huge numbers, and have done so in h2h meetings over the past two decades. As these two weak defenses take on each other, that too under intense pressure, chances are high for the clash to turn into a high-scoring affair.