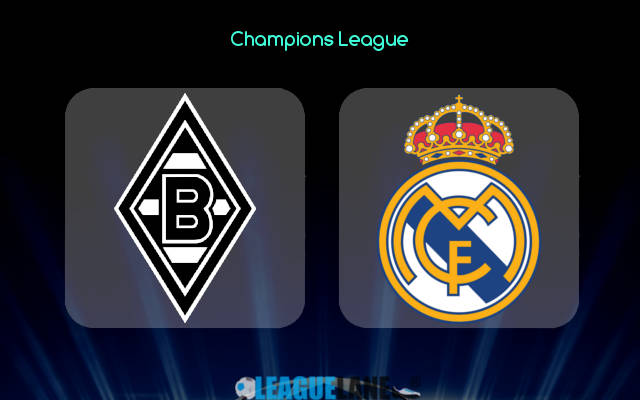 Real Madrid will look to bag their first win of the UEFA Champions 2020/21 season after the surprise 2-3 defeat to Shakhtar Donetsk.

However, the team from Madrid bounced back quickly with the El Clasico win on Saturday and this definitely showed us that things look good on field when Zidane put the right players and right formation on the field.

This is something missing from the Frenchman throughout his managerial career at Real Madrid, but he tend to make the successful tweaks when it matters the most.

It has to be highlighted that Real started last year’s Champions League with a 0-3 defeat to PSG and then drew Brugge 2-2 at the Santiago Bernabeu before bagging 3 wins and a draw from the next 4 to take them through to the knockouts.

Borussia Monchengladbach on the other hand were excellent against Inter Milan, but a late goal denied them three points in a match that ended 2-2.

As opposed to their Tuesday’s opponent, the start they had at the season is solid and they come to this game on the back of a 5 match unbeaten run (2W, 3D) across all competitions.

But can they pile further misery on Real Madrid ?

The bookies do think that the Borussians have a chance and we can see the home win is priced at 3.90 and a draw at 4.00. The Real Madrid win can be backed in the region of 1.87, which is quite high.

The teams are meeting for the first time in 25 years after playing 4 times between 1976 and 85. The overall record is evenly poised on 1 win & 1 draw each.

We saw both teams scoring on 3 of them and over 3.5 goals in three as well.

Gladbach have a poor record against Spanish teams and managed only 4 wins and 4 draws from 16, while losing in 8. The home record is 3 wins, 2 draws and 3 losses from 8.

Real Madrid have come across German teams on 70 occasions and their record is 34 wins, 13 draws and 23 losses.

Their record in German soil is poor having won just 7 of the 33 duels, drew 7 and lost 19.

However, they are unbeaten in the latest four trips to Germany, defeated Bayern twice, drew and beat Dortmund once.

Before I jump into predictions, for any of these to come true, Zidane must field his best eleven. Otherwise we will see a result as in matchday 1.

The key is Benzema, Vinicius and one of Rodrygo or Asensio upfront with Valverde, Casemiro with Kroos or Modric in the middle while defensive pairing on Varane and Ramos must be flanked by Mendy and either Nacho or Lucas on the right back position.

So, this is the line-up we can back the Real Madrid win for 1.87 odd since they have garnered enough confidence from the 3-1 win at Camp Nou on Saturday. I would like to remind you that the margin could have been wider if not for some brilliant saves from Neto.

I also expect to see some goals, yes on either ends since the likes of Marcus Thuram and Alassane Plea have the potential to give plenty of headache to Madrid defenders. This will be well complemented with their high pressing style of play, thus over 2.5 goals, even though priced at 1.50 odd is the most safe option.

Along with these, I will back Vinicius Junior to score anytime in the match since the young Brazilian have netted 3 times in the last 5 appearances across all competitions, including one against Shakhtar off the bench.