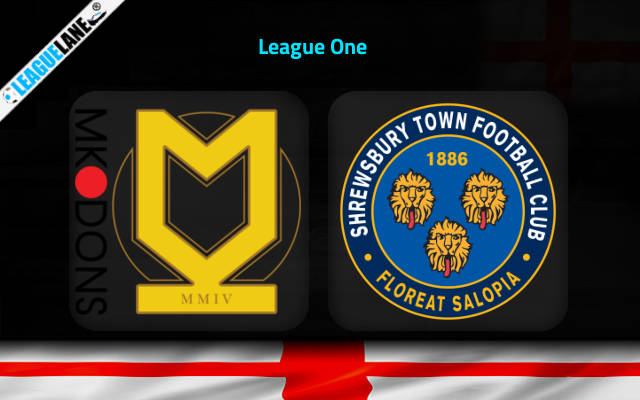 MK Dons vs Shrewsbury Predictions and Free Tips from our expert tipsters when the teams go head-to-head in the England League One on Tuesday, 24 January 2023.

MK Dons are currently at the 19th spot, near the relegation zone. They are now in a stage where they need to play without dropping points if they want to secure their spot in the table.

Meanwhile, Shrewsbury have been going through an inconsistent form since the beginning of this season. They lost thrice in the last five league outings. However, they won the last two matches and have shown a good pick-up.

Shrewsbury won three of the past four meetings against MK Dons. The reverse fixture ended in a 2-1 win for Shrewsbury.

At this venue, MK Dons have been the dominant force. They are on a six-game unbeaten streak against Shrewsbury here.

Who will win the match between MK Dons vs Shrewsbury?

MK Dons were unbeaten in three of the past four home outings. It is worth noting that two of those were draws.

Shrewsbury have an average form on the road. They were unbeaten in two of the past four away matches.

The recent h2h form is in favor of Shrewsbury, but we can’t omit the home form of MK Dons. For all the reasons, we expect a win or draw for Shrewsbury on Wednesday.

More than 60% of the matches played by these two teams had goals under 2.5 ft. On top of that, their recent h2h recordings at this stadium have mostly been low-scoring affairs.

We quite don’t see the value of backing the both teams to score bet here. The main reason for that is the recent displays of both the teams. A low-scoring affair as per the above observations, with an outcome in favor of Shrewsbury doesn’t suggest a both teams scoring scenario.

MK Dons have won just seven and we don’t expect them to pull off their 8th one on Wednesday as they face this Shrewsbury outfits. However, that doesn’t mean that we completely back the traveling side here.

Our first pick is a win or a draw for Shrewsbury bet at 1.57 odds. For the second tip, under 2.5 goals at 1.65 odds seem to be a decent alternative.