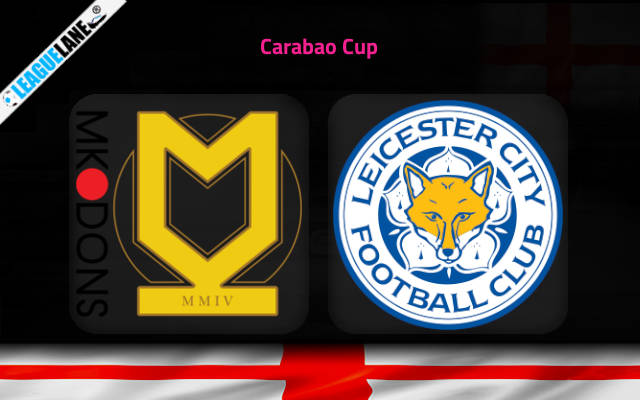 MK Dons vs Leicester Predictions and Free Tips from our expert tipsters when the teams go head-to-head in Carabao Cup on Tuesday, 20 December 2022.

Leicester were close to the relegation zone in the Premier League just a few months ago. Now they have made decent progress. They have a good chance to challenge the Carabao Cup this season.

MK Dons have lost more than 50% of their games this season in League One. Their main focus is towards avoiding relegation at the end of this season. They earlier defeated Morecambe in the third round to reach this stage. Now, their opponents are from the Premier League hence it will be a difficult game for them.

This is going to the third time both teams will go head-to-head. The host are yet to win a single game against Leicester.

The visitors have made good improvement in their away form. They are currently on a three-game winning streak.

Who will win the match between MK Dons and Leicester?

The visitors will most likely advance to the next round of Carabao Cup competition. They have a solid unbeaten record against MK Dons. Moreover, the host are not in a good shape at their domestic league this season.

Do note many key players will be available to selection for the visitors for this upcoming game.

The visiting team have scored two goals in their last two wins in the Premier League. They scored three goals against Newport County in the third round.

Despite being at the bottom of the table, the host have scored in their last ten outings in all competitions. Leicester are also are in decent goal-scoring form. We can expect both teams to score in this match.

The visitors played a good game when they defeated Newport County to reach this round. We can back Leicester to win this game by 2-1 – at 9.00 odd. Despite a lacklustre performance in the Premier League since the beginning, they have played well in this competition.

Our second tip is that Jamie Vardy to score anytime – at 1.95. He scored a brace against Newport County in the third round of the Carabao Cup competition. We can expect him to find the back of the net as MK Dons are struggling in League One.