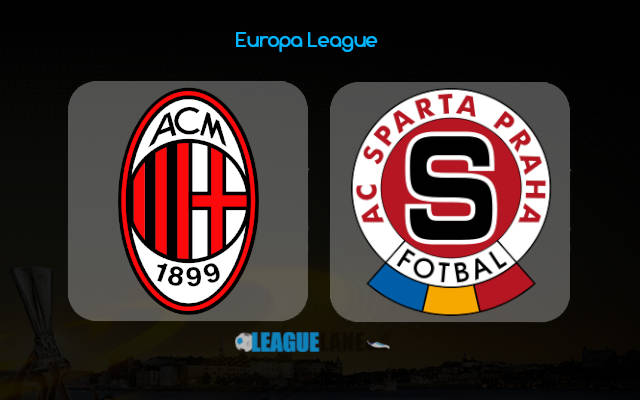 AC Milan will welcome Sparta Prague on Thursday night and this is going to be the first head to head clash between these two teams in the last sixteen years.

The Rossoneri are on a good path to regain old glory, currently leading the title race in Serie A ahead of Napoli, Inter Milan and Juventus. They are also performing well in Europa League, beating Celtic FC last week in Scotland quite convincingly.

Sparta Prague are already pinned to the wall when it comes to top two spots battle, losing to Lille last week at home. We are expecting to see an open clash with a lot of action. As expected, AC Milan are huge favorites for the win at 1.33 odds.

These two teams have locked horns only two times in the past. Both of the duels were in UEFA Champions League playoffs in 2004. AC Milan were victorious 4-1 on aggregate.

We wouldn’t be surprised if Stefano Pioli decides to use mixed lineup for this clash. The squad is surely feeling tired after exhausting 3-3 draw against AS Roma on Monday night. Despite that draw, Rossoneri are still 1st placed team in Serie A with 13 points from five games.

With the supply of three points earned against Celtic last week, they can definitely make rotations in the starting XI. Zlatan Ibrahimovic once again confirmed great form by scoring twice against Roma and twice against Inter Milan.

Sparta Prague were on red-hot series of five consecutive victories before meeting Lille last week. They were easily defeated in the Czech capital 1-4 FT, so upcoming few games are going to be crucial for their playoff hopes. Overall this squad is doing really well on the domestic scene, winning the maximum of 18 points from opening six rounds.

Bad news though is that Czech Liga is currently suspended because of the pandemic. Sparta Prague scored 20 goals in those encounters, and we believe they will also find a way to AC Milan’s net.