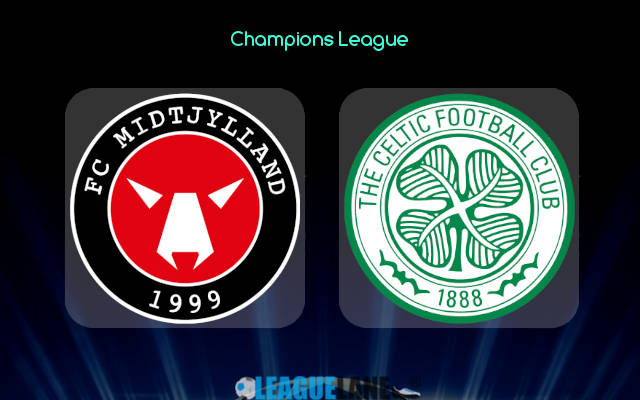 Nothing separated Midtjylland and Celtic in the first leg of their UEFA Champions League Qualifications tie eight days in Glasgow. Which team will edge it in the return fixture on Danish soil?

The teams shared a goal and a red card apiece when they locked horns in the first leg played last week in Glasgow.

Celtic seemed to have wanted the win more, but it was generally a rather boring display from both outfits as we’ve seen very few true goal-scoring opportunities.

Midtjylland thus found their equalizer through Evander from their lone shot on target on the occasion.

It is worth noting that both teams will be without important first-team regulars. Center-back Nir Bitton will miss out for the Scots, while the hosts will lack a strong attacking option in the absence of winger Anders Dreyer.

Both sides were in action over the weekend and Midtjylland were certainly the more satisfied of the two teams.

Their manager Bo Henriksen decided to send the strongest lineup possible to the pitch against AaB in the second round of the new Superliga campaign.

Midjylland bagged their maiden win of the new season (after a shocking home loss to OB on the opening day) in a dominant performance on Saturday (despite scoring just one goal).

Celtic, on the other hand, suffered a demolishing 2-6 defeat to English Premier League side West Ham in a friendly where Ange Postecoglou surprisingly utilized some of his first XI players.

We have plenty of reasons to expect a low-scoring contest here. Firstly, it’s the importance of the game. Secondly, it’s just how Midtjylland lines up at the beginning of the season. Bo Henriksen’s men allowed no shots on target in their weekend’s 0-1 win at AaB in the domestic league.

The visitors will likely control possession, but we doubt they will get too many big-scoring chances on Wednesday. We would even not be surprised to see a goalless draw here (paid at the sky-high 10.50 odds).