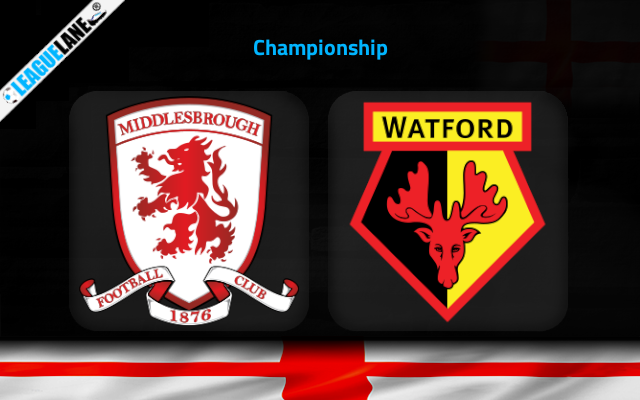 Middlesbrough vs Watford Predictions and Free Tips from our expert tipsters when the teams go head-to-head in the England Championship on Saturday, 28 January 2023.

Middlesbrough have been enjoying a decent Championship season so far. They have managed to maintain their impressive form going. Do also note that they have won four of the past five league matches.

Meanwhile, Watford have also been enjoying their run this season. They are positioned at third, two spots and two points clear from Middlesbrough.

Watford is on a 10-game unbeaten streak against Middlesbrough. The reverse fixture ended in a 2-1 win for Watford.

At this venue, three of the past five matches ended in a draw. Both teams to score lands often in the h2h meetings between these two at this stadium.

Who will win the match between Middlesbrough vs Watford?

Middlesbrough is having an impressive form at home lately. They are on a five-game unbeaten streak and follows a separate three-fixture winning streak.

On the other side, Watford’s recent inconsistency has affected their recordings on the road. They were winless in two of the past four road trips.

Going on, Middlesbrough have a comparatively better form here. Thus, we expect a win for the hosts on Saturday.

More than 60% of the matches played by Watford were low-scoring affairs. Their average offensive and defensive side is the main reason for that. On the other side, Middlesbrough owns a strong attacking side but it seems that they will end up scoring goals below 2.5 ft.

We are quite not sure about the possibility of a both teams scoring display here. Since we expect a low-scoring match with a victory for Middlesbrough, both teams to score is not an ideal option for us to pick as an alternative.

The current stats of both assures an interesting battle here. Anyways, Middlesbrough have managed to deliver a much better display when compared with Watford’s lately.

For all the above reasons, we like to place Middlesbrough to win at 1.91 odds as the main betting option. For the second tip, under 2.5 goals at 1.80 odds seems decent.