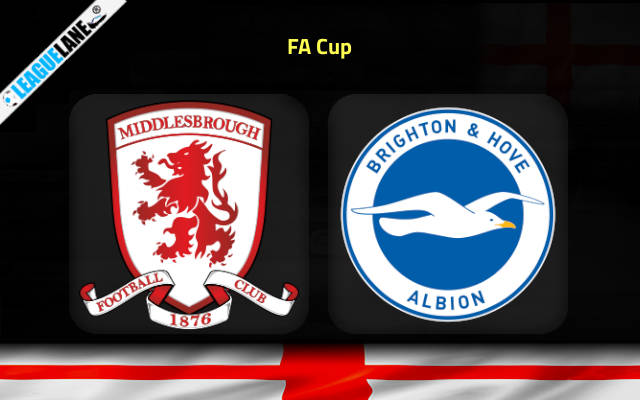 Middlesbrough vs Brighton Predictions and Free Tips from our expert tipsters when the teams go head-to-head in the England FA Cup on Saturday, 07 January 2022.

Middlesbrough have been enjoying a decent Championship season so far in this season and will be following a streak of three winning games to enter an FA Cup knockout fixture against Brighton on Saturday.

Bookmakers see the guests as favorites at 1.62 odds to seal a win here. The quality difference in the leagues these two teams plays might be the reason for that.

The latest match-up between these two was in an FA Cup knockout fixture 2018. that fixture ended in a 0-1 win for Brighton.

At this venue, Brighton is on a five-game unbeaten streak against Middlesbrough. In fact, Brighton have only lost once in the past two decades.

Who will win the match between Middlesbrough vs Brighton?

Brighton have won the last three Premier League road trips in a row. Such a display will count much here as they faces an English second division outfit in this FA Cup fixture.

On top of that Brighton follows a streak of unbeaten games against Middlesbrough at this venue. Therefore, expect a win for Brighton on Saturday.

Five of the last six road trips of Brighton saw the landing of over 2.5 goals ft. The performance of Brighton’s attacking side was the main factor of turning their matches into high-scoring affairs.

Since we expect a win for Brighton, expect this match to have over 2.5 goals ft.

We are quite not sure about the possibility of a both teams scoring scenario here. The main reason is the competitive difference of the leagues played by these two teams.

On top of that Middlesbrough have only scored just one goal in the last five h2h matches against Brighton at this stadium.

Brighton could pull off a win on Saturday and we like to back them at 1.62 odds. For the second tip, Over 2.5 goals seems to be a decent option considering the recent goal trend of Brighton.