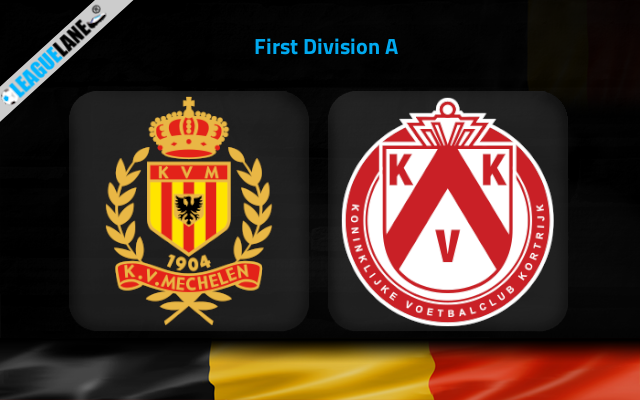 KV Mechelen have been following an unbeaten streak for some subsequent league fixtures of late. They sits at the 7th spot, inside the promotion zone ll of the league table. They have a strong offensive and a disappointing defensive lineup.

KV Mechelen have only lost two of their past 10 league fixtures. They were last seen playing a 1-1 draw against AS Eupen on road in their most recent league fixture, adding up to their unbeaten run. Following such a strong spell of recordings, they will be having positive spirits.

Meanwhile, Kortrijk have been following a disappointing form in the league lately. Their current slump affect their positioning in the table. They are forced down to 12th on the table with 37 points. They have an average offensive and defensive lineup.

Kortrijk lost 0-1 to St. Liege at home in their most recent league fixture to wove a thread of four subsequent losing fixtures in the league. They have been leaking goals too and on the back of that, they will be having lowest of spirits.

By the looks of things, we expect KV Mechelen to deliver a positive display to the local supporters at AFAS-stadion Achter de Kazerne on Saturday evening when they meet Kortrijk in a Jupiler League fixture.

KV Mechelen are unbeaten in each of the past 4 league fixtures at this venue. They have scored two or more goals in each of those fixtures. However, we can expect them to leak one considering their poor defence.

On the other side, Kortrijk are on the back of five winless fixtures in the league on road. They lose each of their past three on road league fixtures leaking two goals.

Therefore, we have more than enough reasons to back the hosting KV Mechelen to seal a win from this fixture.