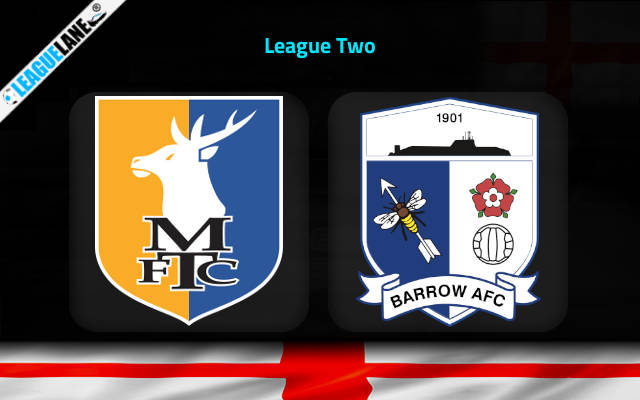 Mansfield vs Barrow Predictions and Free Tips from our expert tipsters when the teams go head-to-head in League Two on Saturday, 7 January 2023.

Mansfield could not get past Walsall last time and will now re-group and focus on their upcoming game against Barrow. They are currently in the seventh position on the table. The main reason behind this success is that they have improved their home form in the last two months.

Meanwhile, things are not looking good for Barrow. They are facing a winless drought at this stage of the season. The last time they won a league game was nearly two months ago. Another interesting fact is that their last away victory was back in September.

Mansfield have won all three head-to-head matches in 2022. Back in November, the host celebrated a 1-0 victory.

The host have won seven of the last ten overall head-to-head matches against Barrow.

Who will win the match between Mansfield and Barrow?

The visitors are going through a downfall. They are struggling to win against mid-table teams. Not to mention that they have lost ten games till now. Therefore, we can expect the host to win this fixture.

It is worth knowing that in three of the last four encounters, the game ended with less than two goals being scored. We can expect the same trend to occur this time as well.

It is unlikely that both teams will score. This is after considering that both teams have not scored in the last two consecutive head-to-head meetings. The only time when both these teams found the back of the net was during the January fixture of last year.

The first tip is that Mansfield will win this game– at 1.90 odd. They are on a three-game winning streak against Barrow. Do also note that the visiting team are winless in their last six matches.

Our second tip is that Rhys Oates will score anytime – the odd for this tip will be at 2.75. The number 18 scored in his last two appearances. Moreover, he scored a second-half goal against Walsall last time.