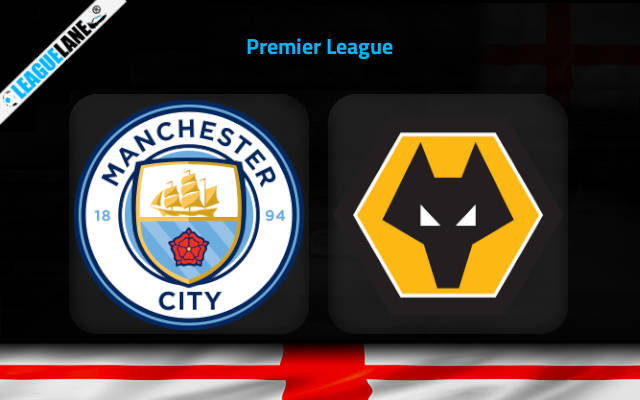 The Mission Premier League title is on when Manchester City welcome Wolverhampton Wanderers this Saturday, the Citizens aiming for nothing less than a win to keep pressure on Jurgen Klopp’s Liverpool.

Both City and Liverpool were handed a lifeline by the brilliant West Ham last weekend, they came back from behind twice to beat Chelsea. The Citizens are the biggest beneficiary of the Blue’s slip and their thumping 3-1 away win at Watford took them to the top of the table.

However, the lead is slender, with Reds just behind at 1 point deficit and the Stamford Bridge faithful 2 points behind.

Manchester City suffered a surprise 1-2 defeat at Leipzig in the midweek. They went to the match with a heavily rotated squad. Regardless of the result, they qualified to the knockouts as group winners ahead of PSG.

Wolves are 8th in the league and 12 points behind the top three teams in the league. They lost 0-1 to Liverpool last time and this stretched their winless streak to 3 games following goal-less draws to Norwich and Burnley.

The team managed by Bruno Lage has struggled in the final third in recent weeks and this is the reason why they managed to win just once in the last 5. This is easier said than done, though an upset result on Saturday will suddenly put them in perfect position for a top four battle.

Manchester City won 4-1 at home and 3-1 away in the two league fixtures against the Wolves last season. However, the team from Wolverhampton did a rare feat with 2-0 and 3-2 wins in the 2019/20 campaign.

At this ground, each of the last 7 Premier League h2h meetings between the teams saw a winner. City the dominant team with a massive six wins.

There is no doubt on Pep Guardiola title credentials and they will be eyeing a sixth consecutive league win on Saturday. Wolves just managed to avoid a humiliating defeat against Liverpool, but a similar ultra defensive strategy will not work at the Etihad.

We find good value in backing ht/ft wins for the home team, which has been paid out in six of Manchester City’s last 8 games at this ground.

Bernardo Silva has scored some screamers in recent outings for the Citizens, five goals in his last five Premier League appearances and he is odds on to score anytime against the team from Wolverhampton on Saturday evening.