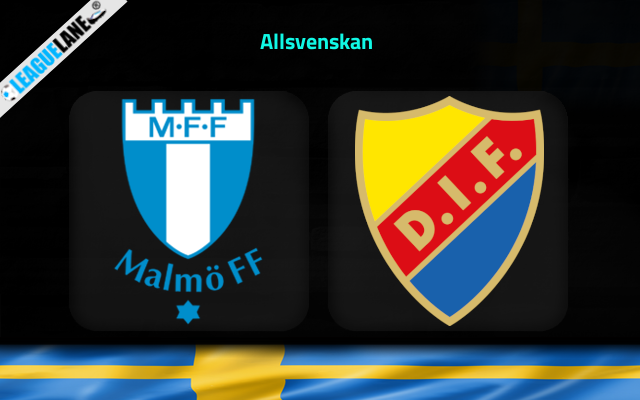 Malmo FF will host away team Djurgarden at Eleda Stadion in an Allsvenskan fixture on Thursday evening.

The bookmakers see the hosts as pretty favorites for the win, pricing them at 2.00 to claim the spoils here. It is very easy to understand why because Malmo had an impressive form in the past fortnight when compared with their counterparts Djurgarden.

Malmo FF will go into this curtain dropper off the back of four successive unbeaten games. Their recent improvement in form took them ahead of Elfsborg and Goteborg in the table to 6th position at the moment.

However, Djurgarden should represent a tight test for Malmo on Thursday. It is worth noting that they had lost all their previous three Allsvenskan games.

The past two fixtures which Djurgarden involved saw goals over 2.5 FT. They had allowed a total of 6 goals in the previous three Allsvenskan defeats too.

Going on, they are still in possession with the 3rd spot of the table. Their potential in claiming wins were displayed better before having a downfall in the past 3 league fixtures.

By the looks of things, expect a both teams involving affair on Thursday at Eleda Stadion.

The home team is currently unbeaten in this stadium for the past three games while their counterparts has failed to find a win in the last two away matches.

Although the home team has a chance of winning after looking at their recent stats, Djurgarden’s form so far this season cannot be underestimated. They have the potential to drew the match at least.

We expect a Both Teams Scoring affair on Thursday considering all these observations.