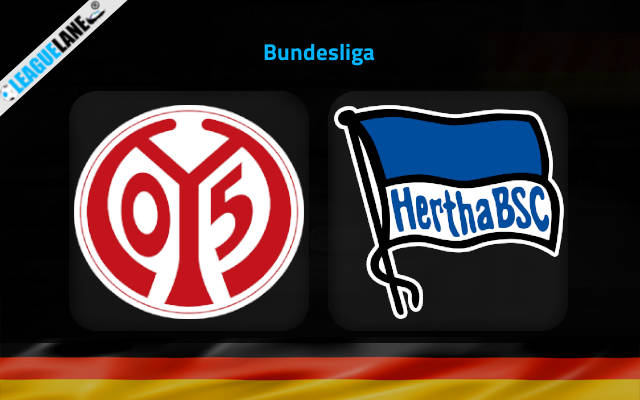 Mainz and Hertha Berlin will raise the curtain on Gameweek No 7 in German Bundesliga on Friday evening at MEWA ARENA.

The hosts will be looking to rebound from a tough 4-1 loss to Hoffenheim. It was the second defeat by a three-goal margin in the last three league rounds for Mainz.

Nevertheless, Bo Svensson’s men stills it at the 6th position in the Bundesliga standings thanks to great form in the opening several weeks.

We should also say that Mainz held Hoffenheim to a scoreless result during the period in which they had eleven men on the pitch last Saturday.

Nevertheless, as soon as Alexander Hack got sent off, Mainz’s game fell apart as Hoffenheim eased their way to a comprehensive victory with four second-half goals.

Mainz have generally been pretty tough to break down so far in the season if we ignore the tough defeats to Bayer Leverkusen and Hoffenheim.

They shipped only two goals in the remaining four matches in the league. Knowing that Hertha Berlin are by no means a massive threat in the final third, we would not be surprised to see the hosts offering a strong defensive display on Friday.

Hertha, on the other side, will enter the game in higher spirits having claimed four points from the previous two league affairs.

They picked up the maiden win of the season in the previous away fixture, beating Augsburg 0-2 on the road.

The team led by Sandro Schwarz backed this result up by holding Bayer Leverkusen to a 2-2 stalemate last weekend at Olympiastadion Berlin.

The bookmakers see Mainz as big favorites here and we are pretty much surprised by this knowing that Hertha have shown improvements in their displays in the last couple of weeks.

We will try and catch the value backing Hertha not to lose at the 2.10 odds, while you can get these same odds for the Under 2.5 goals FT bet.